#15640, (1891-31 May 1961)
NOTE: The information on this page is my research to date and is subject to change as I become better informed. I very much welcome any corrections or additional info you might have - my email address is at the bottom of this page. Whilst historical facts are not copyright, my writing about these facts are. If you wish to use any text from this site on Ancestry or on any other website, please ask me first - Tim Hill.
+ + + + + + + + + +

Thomas Hamilton Battle was born in 1891.1 He was the son of Charles John Battle and Mary Taylor.1 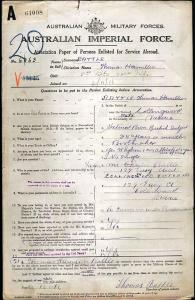 Thomas Hamilton Battle began military service on Friday, 3 November 1916.5 He embarked on Thursday, 23 November 1916 on HMAT Horoata with the 8th Australian Infantry Battalion. He disemarked at Plymouth on Monday, 29 January 1917, then immediately joined 2nd training Battalion at Folkestone.6 Thomas was sent to France on 3 May 1917.

Unfortunately he was seriously wounded in action on Thursday, 25 October 1917 in Belgium.6 Thomas was invalided back to England on 13 December 1917 with injuries to his left thigh, chest and a broken right elbow.6

It was reported to family that Thomas Hamilton Battle had been wounded; it was six long weeks later that they found out that the wounds were serious.6 Thomas returned to Australia on 5 April 1918.7 He was released from active duty on 27 November 1918.6