Richard Darby was born circa 1780.1 He was the son of Richard Darby and Anne Brett. Richard Darby was baptised at St. Peter's on Sunday, 27 August 1780 at Roydon, Essex.2 The church has walls of flint and rubble, and probably dates back to at least 1260. Historically, Roydon was a parish of scattered farms and cottages, with open fields and common meadows. There were 105 ratepayers named in 1734, and the population was 667 in 1801. On the north and west, rivers form the parish and county boundaries.3

Richardlived in June 1809 at Greensted-juxta-Ongar, Essex.4 Greensted is situated in a large natural clearing in Epping forest. The Ongar road is mentioned in The Caturbury Tales. The village was part of the area under Danish law, and in 1801 had a population of 102. In 1839 it was estimated to have 289 acres of arable land and 325 acres of meadows and pasture.5

He married Letitia White, daughter of Humphrey White and Mary Hutchin, in a Church of England ceremony at St. Andrew's on Sunday, 4 June 1809 at Greensted-juxta-Ongar, Essex. The were married on the same day their first child was born. The wedding certificate was also signed by William Baker and Hannah White. Brothers and sisters who may have attended include George Darby. Letitia and Richard went on to have six children together..6,4 Greensted Church has been situated in its idyllic setting for nearly 1,200 years; St. Andrews is the oldest wooden church in the world, and perhaps the oldest wooden building in Europe. It is also said to have been the resting place of unknown early crusader who is said to have arrived, badly wounded, at the church and died there.7

He was recorded in the poll book / electoral register 1832.8 The village lies off the main road in the valley of the Beane on the road to Watton. It is fairly large and somewhat straggling, the church, rectory and school, and Walkern Place, a 17th-century farm-house of timber and plaster lying at the north end. Nearby is a small castle of the mount and bailey type, thrown up possibly by Hamo de St. Clare in the reign of Stephen.9

He made a will on 30 September 1850. The estate consisted of 'farming stock goods chattels and personal estate' and a small amount of cash; overall, it was valued at less than three hundred pounds.. Letitia White and Thomas Playl were named as executors.11

Richard died circa 9 February 1851 of pneumonia.11,12,4 He was buried on 15 February 1851 at St. Mary the Virgin, Walkern, Hertfordshire.4 The church of St. Mary The Virgin stands to the north-east of the village on the east bank of the River Beane. It is built of flint rubble with dressings of Barnack stone and clunch. The original church consisted probably of a chancel and nave. The former has been wholly rebuilt, and the earliest part of the existing church is the nave, which dates from the 11th century and is probably part of the pre-Conquest church.9

Richard's will was probated on 25 March 1851.11 More than 3 years after his death, his property 'with about 15a of Arable and Pasture Land' at Roydon, Essex, was to be sold at auction.13 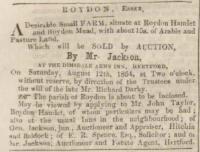