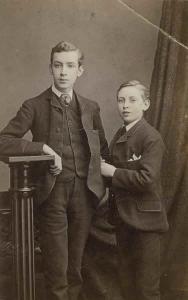 Ernest Wayte Terry (R) with older brother Charles Herman Terry April 1886
NOTE: The information on this page is my research to date and is subject to change as I become better informed. I very much welcome any corrections or additional info you might have - my email address is at the bottom of this page. Whilst historical facts are not copyright, my writing about these facts are. If you wish to use any text from this site on Ancestry or on any other website, please ask me first - Tim Hill.
+ + + + + + + + + +

Ernest was born circa March 1874 at Withington, Lancashire.1,2 He was the son of Thomas Terry and Ruth Anna Leonard.

He was recorded as living with his parents, a boarder, a servant and his brothers Alfred, Frederick, Charles and Thomas in the 1881 census at Wilmslow Road, Withington, Lancashire. He was recorded as being 7 years old.2

He married Annie Theresa Walls, circa 1900 at Scarborough, Yorkshire..4,5

He was recorded as head of household in the 1901 census with Annie Theresa Walls as his spouse at Withington, Lancashire.5 His occupation was recorded as being a chemist and druggist in the census.5