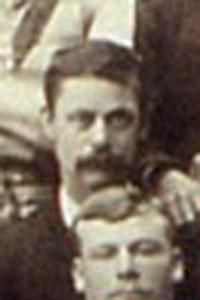 Thomas Hamilton Battle
Source: Britannia Football Club 1891 (Collingwood Forever website)
NOTE: The information on this page is my research to date and is subject to change as I become better informed. I very much welcome any corrections or additional info you might have - my email address is at the bottom of this page. Whilst historical facts are not copyright, my writing about these facts are. If you wish to use any text from this site on Ancestry or on any other website, please ask me first - Tim Hill.
+ + + + + + + + + +

A family legend has it that Albert Edward Oaten was born Church of England, but was brought up Methodist by the Battle family (his first cousins, once removed). This is likely to have been either Charles John Battle (with his teeming family) or Thomas Hamilton Battle who had no children - both lived on Easey Street for long periods around the turn of the century.13 Thomas and Elizabeth lived in 1912 at 176 Easey Street, in Collingwood.14 Thomas Hamilton Battle was a bootfinisher in 1914.15 He was a bootfinisher in 1916.16 Thomas and Elizabeth lived in 1916 at Collingwood.16