#12578, (5 May 1811-May 1838)
NOTE: The information on this page is my research to date and is subject to change as I become better informed. I very much welcome any corrections or additional info you might have - my email address is at the bottom of this page. Whilst historical facts are not copyright, my writing about these facts are. If you wish to use any text from this site on Ancestry or on any other website, please ask me first - Tim Hill.
+ + + + + + + + + +

William Darby was born on 5 May 1811 at Greensted-juxta-Ongar, Essex.1 Greensted is situated in a large natural clearing in Epping forest. The Ongar road is mentioned in The Caturbury Tales. The village was part of the area under Danish law, and in 1801 had a population of 102. In 1839 it was estimated to have 289 acres of arable land and 325 acres of meadows and pasture.2

He was the son of Richard Darby and Letitia White.1 William Darby was baptized at St. Andrews on Sunday, 1 September 1811 at Greensted-juxta-Ongar, Essex.1 Greensted Church has been situated in its idyllic setting for nearly 1,200 years; St. Andrews is the oldest wooden church in the world, and perhaps the oldest wooden building in Europe. It is also said to have been the resting place of unknown early crusader who is said to have arrived, badly wounded, at the church and died there.3

William Darby married Elizabeth Young, daughter of (?) Young and Young (?), at St. Lawrence on Thursday, 17 January 1833 at Ardeley, Hertfordshire.1 The village of Ardeley (or Yardeley until 1850) lies on the western edge of the hill overlooking the village of Walkern and the valley of the River Beane. It consists of the church and the vicarage and a few cottages around the farm known as Church End. In addition to barley, wheat and beans are the chief crops grown. Of 2,424 acres, rather more than half is arable land. The church of St. Lawrence, which stands on high ground to the west of the village, dates back to the 13th century and is built of flint rubble, mostly covered with rough-cast, with stone dressings, and roofed with tiles and with lead. 4

William Darby was a hay and straw carter.5 A report was written in the Hertford paper when some wine was stolen from them.5 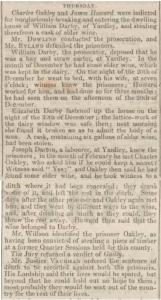