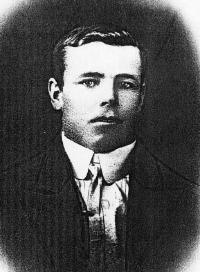 Donald Henry Nicholson
NOTE: The information on this page is my research to date and is subject to change as I become better informed. I very much welcome any corrections or additional info you might have - my email address is at the bottom of this page. Whilst historical facts are not copyright, my writing about these facts are. If you wish to use any text from this site on Ancestry or on any other website, please ask me first - Tim Hill.
+ + + + + + + + + +

His mother died June 1902 at the age of 39. Donald was aged 15 when this happened. After their mother died, their father apparently didn't help raise the children; they were fostered or looked after by family and friends in the Winton and Kyuna district. There is some suggestion that their grandmother never acknowledged her grandchildren, yet according to the birth certificates she assisted with at least some of the births..1

Donald Henry Nicholson married Mary Plant, daughter of Henry Thorncroft Plant and Jane McLachlan, on Wednesday, 3 September 1913 at Charters Towers, Queensland. They were 26 and 22 respectively.1 An annecdote is told about him: Donald and Daniel rounded up a dozen or so brumbies and sold them to a fellow in Cloncurry. That night the brothers let the brumbies out of the holding yard. The horses scattered and took off. Donald and Daniel rounded them up again and headed to Kyuna where they were sold to another buyer.3 Donald lived in 1921 at Koolamarra station, in Queensland.3 He was a stockman, and horseman of repute in 1921.3

Donald was fined as follows: in May 1921:
Donald Nicholson was fined £150 and £33 costs at Cloncurry (Q.), for illegally branding two cows and calves, the property of J. W. Kenrish. It was stated in evidence that Nicholson tried to sell the cattle in question to complainant's brother.4
Donald eventually fell foul of the police. He was convicted in Charters Towers District Court in 1925 for stealing two horses and sentenced to 2 years jail at Stuart Creek Prison in Townsville. When he got out, he bought a model T and started selling groceries to people on isolated stations.5 Mary used to light a fire on the top of a hill in Kajabbi as a warning to her husband Donald if the troopers were in town.5 He was a horse breaker in 1926 at Mount Leyshon, in Charters Towers, Queensland.3

Donald died due to drowning on 18 February 1927:
"It had been noted by family members that Donald was involved in a card game the night before he died, winning a considerable amount of money. After the card game he headed for home. it had been raining heavily all that day and the Leichardt River was well in flood. Apparently someone was not all that happy with how Donald won the money. This person or persons followed Donald along the bank of the flooded river and what happened next is anyone's guess. His body was recovered the next day minus the money. Although unproven it does appear someone else was involved as he had several marks on his body not normally associated with drowning. All tracks tot he river had been washed away by the rising water or rain."1
He was buried on 20 February 1927 at Kyuna Cemetery, in Kyuna, Queensland.1

The following was reported in the Police Gazette::
"The brown saddle mare, No. 25 on this weeks list, and the bay half draught gelding No.26. the property of William A. Reid, was loaned to a man named Don Nicholson, a drover, during the year 1926. On the 18th of February, 1927, Nicholson was drowned in the Leichardt River; his horses were mustered by a man named Rose (at the request of the deceased wife), and it cannot be ascertained if the above were found, and the whereabouts of Rose is at present unknown."6