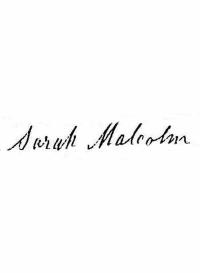 Sarah McCheyne's signature from her son Jame's birth certificate
Sarah McCheyne was also known as Sarah Ann McShane.3 NOTE: The information on this page is my research to date and is subject to change as I become better informed. I very much welcome any corrections or additional info you might have - my email address is at the bottom of this page. Whilst historical facts are not copyright, my writing about these facts are. If you wish to use any text from this site on Ancestry or on any other website, please ask me first - Tim Hill.
+ + + + + + + + + +

She was recorded as living with her parents and five other adults, one of which was likely her grandmother, and another who may have been an uncle in the 1841 census at McMillans Land, Cartsdyke, Greenock, Renfrewshire, Scotland. She was recorded as being just 2 months old.6

Sarah McCheyne was listed as lodger in the 1861 census at 24 Whites Lane, Port Glasgow, Renfrewshire.8 Her occupation was recorded as being a mill reeler in the census.8

Her father died between 1852 and 1861. Her occupation was recorded as being a mill worker in the census.1 Sarah lived in October 1862 at King Street, Port Glasgow, Renfrewshire.1

Her brother Robert got in trouble with the law again and faced the Police Court on 30 January 1866:
Robert M‘Shane, 14 years of age, and Robert Docherty, 12 years of age, were charged with the theft of vest and a bible, the property of Henry Hamilton Hunt, from board the barque Orange Grove, Saturday last. Both pled guilty, and stated that they went down into the forecastle of the vessel to see if they could get some tobacco but, seeing a chest open, they took the articles. Both bad been previously convicted of theft, and Docherty’s father said he was perfectly agreeable that the son, who was out his control, should sent to the reformatory. Both boys were then sentenced to 14 days’ imprisonment, and thereafter to 3 years in the Reformatory School.9,10

Her mother also was involved and was imprisioned for 20 days on 30 January 1866:
Resetting Property Stolen by a Son.— Elizabeth Hawthorne or M‘Shane was charged with the reset of a vest and bible, in the house occupied by her in the Vennel, on Saturday, which articles had been stolen by Robert M'Shane (her son) and Robert Docherty from the barque Orange Grove, she well knowing that the said articles were stolen. Panel pled not guilty. From the evidence led it was shown that the boy M' Shane had taken the articles to his mother. When charged with the reset of the articles, she gave up the bible, but denied all knowledge of the vest. When being about to be locked up she told that she had hid it in ashpit, where it was found torn all to pieces She was found guilty, and sentenced to be imprisoned for 20 days.9,10

Her husband George died 21 January 1871 at the approximate age of 32, leaving her a widow.

Sarah McCheyne appeared in the 1871 census at Glasgow Royal Infirmary, Glasgow. Of the three children she was know to have had, two were living with their grandmother.11