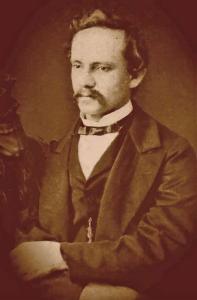 William John Anderson
Source: Ancestry user Olmorijo Olmorijo
NOTE: The information on this page is my research to date and is subject to change as I become better informed. I very much welcome any corrections or additional info you might have - my email address is at the bottom of this page. Whilst historical facts are not copyright, my writing about these facts are. If you wish to use any text from this site on Ancestry or on any other website, please ask me first - Tim Hill.
+ + + + + + + + + +

He married Emma Frances Baker, from a Congregational family, daughter of Reverend Edward Knight Baker and Ruth Wayte, on Friday, 24 June 1864 He was 22 and his wife Emma was 21..3

William and Emma were both ill with a fever January 1867 and went to their daughter Euphemie to Grand River, in Port Louis, Mauritius.4

Early in 1868 Emma was "labouring under a sad nervous affection" after the death of her two young daughters, all in the space of a year. She wrote a melancholy poem called 'The Trial' in which she wrote:

'But life, not death
Is mine; like those steep mountains far away
The long years rise before me cold and grey,
To tread with panting breath.5'

Both of her children died young, perhaps giving rise to the suggestion that she died childless.3

A year after Emma died, her widower William published a book of her poems - 'Colonial Poems' - in London. In a preface, he describes her as "a pious, gentle and thoughtful spirit" and reports that she "expressed a wish that her fugitive and scattered verses, some of which had appeared in Australian Periodicals under the signature 'Frances', should be collected and presented in a permanent form to her parents and others whom she had loved".7

He married Georgina Marie Augusta Paddle, in 1892 at Hobart..9