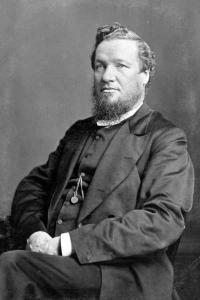 Rev. Charles Manthorpe
(Source: State Library of South Australia)
NOTE: The information on this page is my research to date and is subject to change as I become better informed. I very much welcome any corrections or additional info you might have - my email address is at the bottom of this page. Whilst historical facts are not copyright, my writing about these facts are. If you wish to use any text from this site on Ancestry or on any other website, please ask me first - Tim Hill.
+ + + + + + + + + +

Charles gave a lecture entitled "Christopher Columbus : his Life and its Lessons" to the Sturt Institute on 15 April 1859.7 On 21 May 1859 Charles was granted an authorization to grant marriage licences.8 On 15 June 1859 Charles was publicly recognised as Pastor of the United Independent Churches of Happy Valley and Morphett Vale.9

He married Harriet Whitridge Baker, daughter of Reverend Edward Knight Baker and Ruth Wayte, in a Congregational ceremony performed by Reverend Thomas Quinton Stow at her father's house on Thursday, 20 October 1859 at Morphett Vale, South Australia. Harriet, born in Madagascar, was the daughter of a Congregational minister.. Others who may have attended the wedding include Ruth Wayte as mother of the bride, Reverend Edward Knight Baker as father of the bride, Sarah Love as mother of the groom and James Symonds Manthorpe as father of the groom. Brothers and sisters who may have attended include Ellen Masters Baker and Emma Frances Baker. Charles and Harriet went on to have as many as 13 children together.10,111


He was initially a minister at Freeman Street Congregational Church, in, but resigned in 1862. When he resigned the congregation presented him with 50 sovereigns and a writing desk and his wife with a complete work box and writing desk.2 Charles (and presumably his spouse Harriet) lived in May 1862 at Franklin Street, in Adelaide, South Australia.12

He began ministering at at Glenelg Congregational Church in the Adelaide suburb of Glenelg on 4 May 1862 and was thought of as a 'large hearted and generous minister.13'

In circa 1871 he had experienced "failing health and domestic affliction, to which he need not further refer", likely a reference to his wife's sister having being deserted by her husband.11

Charles conducted the ceremony for his sister-in-law Ellen's wedding to Charles Moss Sprigg, at Glenelg Congregational Church Others who may have attended the wedding include Ruth Wayte as mother of the bride and Reverend Edward Knight Baker as father of the bride. on Wednesday, 2 September 1874 at Glenelg. Charles and Ellen went on to have just one known child together.14,15

In April 1875 he was granted 12 months leave due to ill health and, with a gift of 600 guineas, departed for Liverpool on the Aurora on the 6th of May. He was expected to be away for a year. On the voyage there was a serious ship fire (perhaps due to the combustion of the ship's wool cargo) and the ship was lost but all on the ship were saved by another ship. It was said that Charles would remark on the voyage that his chief wants were four B's—a good bath, a good bed, a good breakfast, and a good barber.13,11

Whilst in England Charles spent time with his mother Sarah, and also visited the Isle of Wight and Paris. However, he was very keen to return to South Australia as "the sun knew how to shine there, but it did not in England". It was said that "he preferred this colony to the old country in many respects; he liked the freedom of social intercourse, the freedom of opinion that prevailed, and the absence of poverty, which contrasted so strangely with things in England".16,11

He returned to South Australia, resuming his duties on July 1876 at the age of 40.11

After overseeing the construction of a new church 'with a design Italian in character', he celebrated his 25 years in his pastorate at Glenelg in April 1887.13

He attended an International Council of Congrgational Churches in 1891 in an unknown place as a South Australian Representative.3

He resigned his ministry of Glenelg on 26 March 1893, and was presented with a salver and a purse of 330 sovereigns.17

In circa 1895 he accepted a call to the Parkside church.13

He finished ministering at at St Andrews Congregational Church in the Adelaide suburb of Glenelg in April 1898 after a period of 36 years.2 At the opening of the new church on 4 December 1898 he was struck by a serious illness.13

He was remebered as having:
"a singular gift in prayer, and his sermons were popular and edifying. His name was known and honoured in denominational circles throughout Australia. Gentleness was his great characteristic. He always took the best side of one's character. He gained distinction through his quietness and charm of personality."13
His body was interred at Brighton Cemetery on 8 December 1898 at Adelaide. The funeral was attended by many South Australian luminaries..18