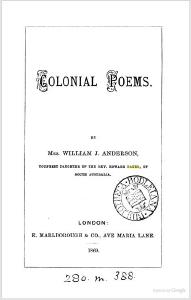 A book of Emma's poems, published the year after her death by her husband.

Source: Google Books
NOTE: The information on this page is my research to date and is subject to change as I become better informed. I very much welcome any corrections or additional info you might have - my email address is at the bottom of this page. Whilst historical facts are not copyright, my writing about these facts are. If you wish to use any text from this site on Ancestry or on any other website, please ask me first - Tim Hill.
+ + + + + + + + + +


She may have attended the wedding of her sister in the marriage of John Edward Tapley and Ellen Masters Baker They were married at her parent's residence in a Congregationalist ceremony conducted by Ellen's father at Hillside House on Friday, 25 December 1857 at Morphett Vale, South Australia. John and Ellen went on to have two children together.6,7,8 Emma Frances Baker evidently - based upon a poem she wrote - grew up at Australia.9

She may have attended the wedding of her sister in the marriage of Reverend Charles Manthorpe and Harriet Whitridge Baker in a Congregational ceremony performed by Reverend Thomas Quinton Stow at her father's house on Thursday, 20 October 1859 at Morphett Vale, South Australia. Charles and Harriet went on to have as many as 13 children together.10,1

She married William John Anderson, an employee of the Mauritian civil service, son of John Anderson Esq., on Friday, 24 June 1864 She was 21 and her husband William was 22..4 She wrote a poem memorialising Reverend Stow.11

William and Emma were both ill with a fever January 1867 and went to their daughter Euphemie to Grand River, in Port Louis, Mauritius.12

Early in 1868 Emma was "labouring under a sad nervous affection" after the death of her two young daughters, all in the space of a year. She wrote a melancholy poem called 'The Trial' in which she wrote:

'But life, not death
Is mine; like those steep mountains far away
The long years rise before me cold and grey,
To tread with panting breath.13'

Both of her children died young, perhaps giving rise to the suggestion that she died childless.4

Emma died on 12 April 1868 (Easter Sunday) at Souillac, Mauritius, at age 25 at home trying to give birth to a third daughter (another account gives her cause of death as epilepsy ('the most severe and complicated form').14,15,1,16 Her body was interred at Souillac Cemetery at Souillac, Savanne, Mauritius.3

A year after Emma died, her widower William published a book of her poems - 'Colonial Poems' - in London. In a preface, he describes her as "a pious, gentle and thoughtful spirit" and reports that she "expressed a wish that her fugitive and scattered verses, some of which had appeared in Australian Periodicals under the signature 'Frances', should be collected and presented in a permanent form to her parents and others whom she had loved".17