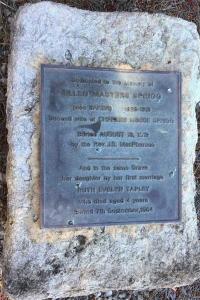 Memorial marker for Ellen Masters Baker and her Daughter Ruth Tapley.
Source: Find a Grave Memorial 194184193
NOTE: The information on this page is my research to date and is subject to change as I become better informed. I very much welcome any corrections or additional info you might have - my email address is at the bottom of this page. Whilst historical facts are not copyright, my writing about these facts are. If you wish to use any text from this site on Ancestry or on any other website, please ask me first - Tim Hill.
+ + + + + + + + + +

Ellen Masters Baker was born circa 1838 at Mauritius.2,1 She was the daughter of Reverend Edward Knight Baker and Ruth Wayte.1

Ruth returned briefly to England on the John Bagshaw, arriving 31 July 1841 where "she entered the two oldest children in the missionary school at Walthamstow and the returned with the youngest to Mauritius".3 At about the age of 6, Ellen travelled with her 29 year old cousin Mary Leonard and her older sister Harriet from London on 25 July 1845 on the Templar.4,5 Ellen arrived at Port Adelaide, South Australia, on 24 November 1845.4

She married John Edward Tapley, an accountant from Adelaide, son of Richard Edward Tapley and Arabella McDonald, They were married at her parent's residence in a Congregationalist ceremony conducted by Ellen's father at Hillside House on Friday, 25 December 1857 at Morphett Vale, South Australia.. Others attending the wedding include Ruth Wayte as mother of the bride, Arabella McDonald as mother of the groom and Richard Edward Tapley as father of the groom. Brothers and sisters who may have attended include Harriet Whitridge Baker and Emma Frances Baker. John and Ellen went on to have two children together.6,7,8

She may have attended the wedding of her sister in the marriage of Reverend Charles Manthorpe and Harriet Whitridge Baker in a Congregational ceremony performed by Reverend Thomas Quinton Stow at her father's house on Thursday, 20 October 1859 at Morphett Vale, South Australia. Charles and Harriet went on to have as many as 13 children together.9,1

John travelled to Madras in 1860. He stayed their briefly before settling in Calcutta. Form there, John sent Ellen letters and small sums of money.10

John and Ellen story quickly took a turn for the worse:

However in 1863 when the sums stopped coming she travelled to Calcutta where she found him living under the name H. Clarton with another woman [whom he had married the year before]. He refused her request that he return to Australia with her.10,11
She and John Edward Tapley were divorced in October 1873 and the Chief Justice stated that "it appeared to him the desertion and adultery were clearly proved". After the divorce, Ellen reverted to her maiden name.12,13

She married Charles Mosse Sprigg, a farmer marrying for the second time, in a Congregational ceremony conducted by her sister's husband Reverend Charles Manthorpe at Glenelg Congregational Church on Wednesday, 2 September 1874 at the Adelaide suburb of Glenelg.. Others who may have attended the wedding include Ruth Wayte as mother of the bride and Reverend Edward Knight Baker as father of the bride. Brothers and sisters who may have attended include Harriet Whitridge Baker. Charles and Ellen went on to have just one known child together.14,10