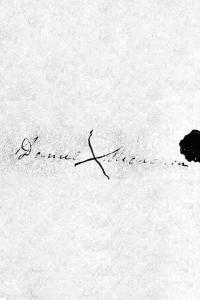 Donald (Daniel) Nicholson's mark
Source: marriage record
NOTE: The information on this page is my research to date and is subject to change as I become better informed. I very much welcome any corrections or additional info you might have - my email address is at the bottom of this page. Whilst historical facts are not copyright, my writing about these facts are. If you wish to use any text from this site on Ancestry or on any other website, please ask me first - Tim Hill.
+ + + + + + + + + +

Donald Nicholson was also known as Daniel.2 He may have been born circa 1773 at Snizort, Portree region, Isle of Skye, Scotland.1 He was a labourer in 1794.2 Donald lived in September 1794 at Ulverston, Lancashire.3

On Wednesday, 28 December 1808 Donald retired from the Royal Navy.1

Donald, as the father of the groom, along with Ann may have attended the wedding of Donald and Jane Wetherell in a Church of England ceremony at St. Michael in the Hamlet on Monday, 17 May 1824 at Aigburth, Liverpool. Donald was 20 and his wife Jane was 21. Others who may have attended include . Jane and Donald went on to have some 12 children together, seven of whom lived to adulthood.5 Donald Nicholson was a customs officer for 28 years from 1814 until 1842 with an annual salary of £61 4s and an annual pension of £32 at Liverpool.1

He was recorded as head of household in the 1841 census with Ann Metcalf (which other records indicate is his spouse) at Milton Street (?), Howard Street district, Liverpool. His approximate age, rounded down to the nearest 5 years, is recorded as being approximately 65. Also living in the house were their son Samuel and his wife Sarah.6 His occupation was recorded as being a revenue officer in the census.6 Donald (and presumably his spouse Ann) lived in July 1842 at Milton Street, in Howard Street district, Liverpool.7