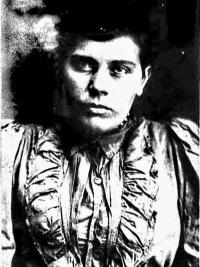 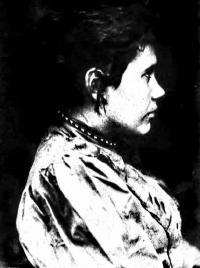 Martha L. Ashpole was likely born circa 1872 at Dubbo, New South Wales.3,1 She was the daughter of Thomas Ashpole and Elizabeth Sharp.1,2

Martha and William Donald Olliver became the parents of William O. Ashpole circa 1893 at Parkes, New South Wales. Although it can't be certain, it seems William was born from an indiscretion between his father, just newly married to another woman, and Martha, a twenty one year-old..4

Although the exact circumstances and her motivations can only be guessed at, in January 1895, Martha L. Ashpole fired two shots from a revolver at William Donald Olliver, but failed to hit him.6,7

Martha When Martha first appeared in front of the Bathurst Circuit Court she on 19 April 1895:
wore a thick veil, wept so bitterly and violently, that his Honor remarked that she was evidently quite unequal to the strain of standing her trial. He understood that prisoner was to have been defended, and as it appeared that such was not the case, the interests of justice would be served if some legal gentleman would undertake her defence. The prisoner was then removed, weeping hysterically, and another case was proceeded with. Mr. Moriarty subsequently undertook to defend the accused, and the case was postponed.8

Martha was originally charged with two offences; one of attempted murder and the second of attempting to cause grevious bodily harm. During the trial, circumstances were revealed that indicated that William had behaved in a irresponsible way and had treated Martha poorly, but the judged instructed the jury that they could not take that into account; rather, they had to make a determination about whether she was guilty or not of the charges. It seems likely that the jury had compassion for her circumstances and the first charge was dropped; she was sentenced to imprisonment for 3 years. It was reported in a contemporary newspaper that one of her parents was an Aboriginal person, although this doesn't accord with her acknowledged parents.5,9,10,3

William Donald Olliver was taken to court by Martha L. Ashpole in July 1898 (which was likely to be just after her release from prison if she served her full sentence) and he ordered to pay 5 shillings a week for 'affiliation' - likely as a support for their child William, as Williams paternity was proved during the trial.11

Martha and an unknown person became the parents of Frederick R. Sutherland in 1902 at Forbes, New South Wales.13