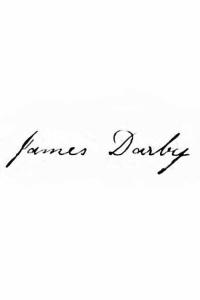 James Darby signature 1840
Source: wedding certificate of his daughter Mary
NOTE: The information on this page is my research to date and is subject to change as I become better informed. I very much welcome any corrections or additional info you might have - my email address is at the bottom of this page. Whilst historical facts are not copyright, my writing about these facts are. If you wish to use any text from this site on Ancestry or on any other website, please ask me first - Tim Hill.
+ + + + + + + + + +

James Darby was likely born circa 1786 at Great Parndon, Essex.2 He was the son of Thomas Darby and Elizabeth Perry. James Darby may have been born circa 1790.1 James Darby was also known as George.3 James Darby was indentured to George Darby as an apprentice on 9 February 1805 at Hertford. James was George's nephew, and continued as a millwright for the rest of his working life.1

James Darby married Elizabeth Brambel at St. Andrew's Parish Church on Wednesday, 25 December 1811 at Hertford.4 St. Andrews was a church of Saxon origin, and was added to until the mid 18th century to accomodate a growing population. By this stage it had deteriorated to such a degree that it was torn down and a new church built in 1870.

In Thomas Darby's will on 9 July 1830 Elizabeth Darby, Ann Darby, Richard Darby, James Darby, Hannah Darby, George Darby, Elizabeth Perry and Sarah Darby were named as heirs. The will specified that all of his posessions were to go to his wife, and then after her death it was to all be sold and divided amongst his children equally..6

In the codicil to Thomas Darby's will on 5 August 1830 Elizabeth Darby, Ann Darby, Richard Darby, James Darby, Hannah Darby, George Darby, Elizabeth Perry, Elizabeth Darby and Sarah Darby were named as heirs. The codicil added that after the will was executed his children were to each generally pay 20 pounds each back to his executors, who would then divide the amount into three and give the resulting amount "for the use of my children which are these three William Darby, Elizabeth Brown and Susannah Bush for their own use and benefit in addition to their shares as before mentioned they not having had so much assistance from me". It is suspected that Thomas did not actually have a daughter Susannah, but referred to another close member of his family. He also bequeathed 40 pounds to the maintenance of Elizabeth, the daughter of his late son Benjamin..6 James and Elizabethlived in September 1830 at Plumbridge Street, Greenwich, London.5,7 James and Elizabethlived in April 1833 at Blackheath Hill, Greenwich, London.5

Thomas Darby's will was probated on 9 August 1833. Thomas' wife Elizabeth died less than three years later, and his property was sold (and presumably the proceeds divided up as he specified) in accordance with his will and codicil..8

They was recorded as head of household in the 1841 census at Greenwich, London. Also living in the house were two of his children.9 His occupation was recorded as being a millwright in the census.9

He was recorded as head of household in the 1851 census with Elizabeth Brambel as his spouse at 12 Vine Street, Westminster, London. Also in the household was their youngest daughter Adelaide.2 His occupation was recorded as being a millwright in the census.2