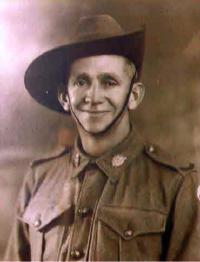 James Norman Le Clerc Nicholson
NOTE: The information on this page is my research to date and is subject to change as I become better informed. I very much welcome any corrections or additional info you might have - my email address is at the bottom of this page. Whilst historical facts are not copyright, my writing about these facts are. If you wish to use any text from this site on Ancestry or on any other website, please ask me first - Tim Hill.
+ + + + + + + + + +

James Norman LeClerc Nicholson was born on 21 May 1902 at Kyuna, Queensland.1 He was the son of Daniel Malcolm McBean Nicholson and Catherine Ann O'Reilly.1

His mother died June 1902 at the age of 39. After their mother died, their father apparently didn't help raise the children; they were fostered or looked after by family and friends in the Winton and Kyuna district. There is some suggestion that their grandmother never acknowledged her grandchildren, yet according to the birth certificates she assisted with at least some of the births..2 Norman was reared by John and Agnes Swan, John being a blacksmith at Kyuna, but later moved to Halifax.3 James Norman LeClerc Nicholson was also known as Norman.4