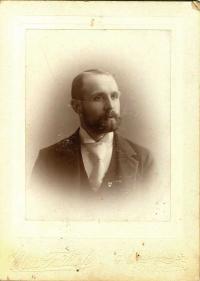 The son of
Fredrick[sic] Horrocks Miller
Mrs. Darbys Brother
(Source: M. Willson Collection)
NOTE: The information on this page is my research to date and is subject to change as I become better informed. I very much welcome any corrections or additional info you might have - my email address is at the bottom of this page. Whilst historical facts are not copyright, my writing about these facts are. If you wish to use any text from this site on Ancestry or on any other website, please ask me first - Tim Hill.
+ + + + + + + + + +

Dr. Frederick M. Miller was born circa 1871.3 He was the son of Frederick Horrocks Miller and Sarah Rowe.2

A short obituary was written about him on 26 April 1895:
The sad news has been received here of the death in Indianapolis on Tuesday of Dr. F. M. Miller, who a few years ago was a resident of Pittston, and who still has many friends here. For a year or more past D. Miller has been practising at Noxen, Pa. Several months since he was taken ill, and about four weeks ago he went to his parents' home in Indianapolis, where he passed away. He was a popular young man with a bright future, and his untimely death is sincerely mourned by those knew him.1