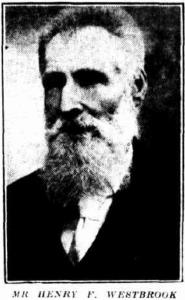 Hery Fookes Westbrook
Source: The Herald (Melbourne) 21/12/1929 p.25
NOTE: The information on this page is my research to date and is subject to change as I become better informed. I very much welcome any corrections or additional info you might have - my email address is at the bottom of this page. Whilst historical facts are not copyright, my writing about these facts are. If you wish to use any text from this site on Ancestry or on any other website, please ask me first - Tim Hill.
+ + + + + + + + + +

Harry Fookes Westbrook may have been born on 4 November 1826 at Elizabeth Street, in Hobart. However, it is extremely unlikely as his family did not arrive in Tasmania until 1829 and he is not listed on the immigration records. It is much more likely that he was born after their arrival in 1829..2 He may have been born circa 1829 at Hobart.1,2 He was the son of Dr. Samuel Westbrook and Mary Margaret Mason.1

He may have attended the wedding of his sister in the marriage of Rev. Samuel Berjew Fookes and Margaret Sarah Westbrook in a Church of England ceremony at St. John the Baptist on Saturday, 20 February 1847 at Buckland, Tasmania. Samuel and Margaret went on to have four children together, two of whom lived into their adulthood.3,4,5

"Going in for squatting, Mr. Westbrook became manager of Parker's station at Cressy, and later was made overseer on William Grubb's run."2 Harry Fookes Westbrook moved to Melbourne in 1911.2

A lengthy biography was pubished in a newspaper on Saturday, 21 December 1929:
MR. HENRY FOOKES WESTBROOK, who is spending the early autumn of his his life contentedly at Heidelberg, is a contender for the distinction of being Australia's oldest native. He was born in Elizabeth Street, Hobart, on November 4, 1826. He recently stepped past his 103rd milestone. This grand old man remembers Lieut. Colonel George Arthur, who arrived at old Hobart Town as Governor of Van Diemen's Land in 1824. He was a boy of six when the first Hobart Town Cricket Club was formed. It was subsequently called the Break o' Day Club, which sobriquet remained for many years. The club mentioned was the pioneer cricket team in Australia, and it was "going" long before mainlanders took up the sport. Mr Westbrook joined this in 1840, a few years after the home side triumphed in the first international game contested in this country, Tasmania defeating an eleven drawn from the crew of the visiting British ship Hyacinth and a recently arrived English regiment of soldiers. The first English professional brought to Australia, one Marshall, went direct to Hobart, there to instruct young Westbrook, as well as other boys, in the national game. And young Harry (he prefers Harry to Henry) developed into a good cricketer. It is now his boast that in addition to being the oldest living cricketer in Australia, he was never once clean bowled. His father, Dr. Samuel Westbrook and his uncle Dr. James Westbrook, were the first civilian doctors to practise in Tasmania; and his brother-in-law, Joseph Downward, was at one time Superintendent of the Port Arthur prison hospital. . . . . Mr Westbrook has vivid recollections of the bad old days. He was a young man of eighteen when no fewer than 15,000 prisoners arrived. That was during one year of transportation. Conjuring up mental pictures of the chain gangs at work making the Hobart-Launceston road, he went on to remark "One dared not offer the poor wretches so much as a bit of tobacco. If discovered with a piece in their possession they were flogged at the triangle." He recalled the whaling days, when Hobart ranked as one of the chief whaling ports of the world. No fewer than 47 vessels engaged in the Industry were anchored in the Derwent in 1847. Those were the days when the Derwent Whaling Club offered a prize of eight dollars (Spanish and Mexican coinage) to the first person who reported the presence of a whale in or near the river. Mr Westbrook went in for squatting as a young man; that would be after Queen Victoria gave the Royal assent to an act to establish a Parliament in Van Diemen's Land. Tasmania was the first of the Australian colonies to receive this grant. He became manager of Parker's station at Cressy, and was later made overseer on William Grubb's extensive run. The Grubbs are well-known Tasmanian wool-growers and breeders. . . he remembers when the Port Arthur penal establishment — some of ruins remain today — was broken up, in 1877. Henry Westbrook arrived here in 1911 — he was then aged 85 — and settled down. His wife died ten years ago. Of 11 children, eight are living, one being Mrs Olive Nielsen, with whom Mr Westbrook is living at Heidelberg. Another daughter, three nieces, and a nephew are living in Melbourne, and other members of the family, are scattered about in the different States. Hobart's contribution to the little band of Victorian centenarians keeps, very good health, his eyesight and hearing are almost unimpaired, and he leads a fairly active life. Unaccompanied, he often travels from Heidelberg to Malvern.2

Harry died in July 1930 at the Melbourne suburb of Murumbeena.6,1