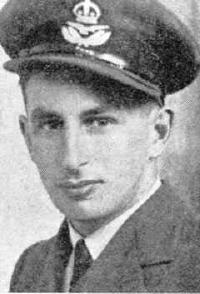 Flying Officer Ernest Berjew Fooks
Source: https://dunsfoldairfield.org/crash-two-raf-b-25s-pallinghurst-rudgwick-7th-jan-1944/
NOTE: The information on this page is my research to date and is subject to change as I become better informed. I very much welcome any corrections or additional info you might have - my email address is at the bottom of this page. Whilst historical facts are not copyright, my writing about these facts are. If you wish to use any text from this site on Ancestry or on any other website, please ask me first - Tim Hill.
+ + + + + + + + + +

Ernest was born circa 1911 at New Zealand.1 He was the son of Alfred Augustus Fooks and Adele Catherine Helen Nairn. Ernest was a Flying Officer with the 180 Squadron, RAF in the Second World War.2

Ernest died on 7 January 1944 at Rudgwick, Horsham, Surrey, Ernest died when the aircraft he was piloting hit another aircraft. They were returning from a bombing raid in bad weather; his aircraft dove into the groud and the other aircraft crashed nearby. All crew from both aircraft were killed..2,3

Ernest Emily Harwood (nee Covey), a witness, describe dthe accident:
One day I shall never forget (7th January 1944) Mitchell bombers were returning to Dunsfold on an operational flight, but, unable to find the target had bombs on board. Two collided over Pallinghurst, one crashing in front (actually behind and south-east) of Pallinghurst House, the other one by the stables. The bombs fell out of the plane and landed in a field close to my father. He fell behind a tree which took most of the blast. Mr MacAndrew’s daughter [Kitty (Katherine Flora Lund)] was blown into the pond and received a cut on her leg, but all the airmen died. A few years later, when we were settling down once again, Mr MacAndrews decided to plant some rhododendrons near where the plane had crashed. My brother, now home from the RAF, was the Head Gardener, and he and the other gardeners planted them.2
His body was interred at Brookwood Military Cemetery at Woking Borough, Surrey. His brother, who also died in a WWII aircraft crash, is buried in the same cemetery.4