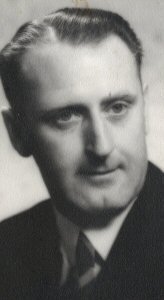 Source: Parliament of Tasmania biography https://www.parliament.tas.gov.au/history/members/brehenyj512.html
NOTE: The information on this page is my research to date and is subject to change as I become better informed. I very much welcome any corrections or additional info you might have - my email address is at the bottom of this page. Whilst historical facts are not copyright, my writing about these facts are. If you wish to use any text from this site on Ancestry or on any other website, please ask me first - Tim Hill.
+ + + + + + + + + +

John was born on Tuesday, 17 May 1910 at Toowoomba, Queensland.1,2 He was the son of John Leslie Breheny and Dora Fookes Reid. He presumably lived with his parents at Bridge Street, in Toowoomba, Queensland, in 1913.2 John Gerald Breheny was also known as Jack.3,2 He presumably lived with his parents in 1922.2 He was a bank officer with the Bank of Australia from 1927 to 1950.3,2 John lived in 1936 at Stanley, Tasmania.2

John Gerald Breheny began military service on Wednesday, 29 May 1940 at Perth, Tasmania, at age 30.1,4 With the He was a Corporal with the 2/3 Machine Gun Battalion.4 Brothers John and Brian were both captured by the Japanese at the fall of Singapore and were part of the POW workforce on the infamous Burma Railway.4,2 He was released from active duty on 10 January 1946.1,4 John lived in 1954 at the Bridge Hotel, in Stanley, Tasmania.2 He was a state parliamentarian from April 1951 to April 1972, and was Government Whip for three years.4,2 He was Hi was a local councillor in Ulverstone, Tasmania, from 1976 to 1991 in 1976 at Ulverstone, Tasmania.5

John died on 11 February 2009 at Ulverstone, Tasmania, at age 98.2 His body was interred at St. Andrew's Anglican at Perth, Tasmania.2