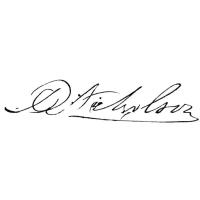 Donald Nicholson's signature from his son Donald's wedding certificate in 1856
(Source: Liverpool Marriages and banns, Reference Number: 283 PLP/3/16)
Photograph by Tim
NOTE: The information on this page is my research to date and is subject to change as I become better informed. I very much welcome any corrections or additional info you might have - my email address is at the bottom of this page. Whilst historical facts are not copyright, my writing about these facts are. If you wish to use any text from this site on Ancestry or on any other website, please ask me first - Tim Hill.
+ + + + + + + + + +

Donald was born on Tuesday, 28 February 1804 at Ulverston, Lancashire.2 He was the son of Donald Nicholson and Ann Metcalf.1 Donald lived in May 1824 at Walton-on-the-Hill, Liverpool.3

He was recorded as head of household in the 1841 census with Jane Wetherell (which other records indicate is his spouse) at Walton-on-the-Hill, Liverpool. He was 37 years old. The 1841 census only recorded adult ages rounded down to the nearest 5 years; his approximate age was recorded as 35 years old. Also in the household were seven of their children and a servant.10 Donald Nicholson was a hatter in 1843 at 38 Castle Street, Liverpool.11 Donald (and presumably his spouse Jane) lived in December 1843 at Castle Street, in Liverpool.12

He was recorded as head of household in the 1851 census with Jane Wetherell as his spouse at Prescot Road, West Derby, Liverpool. He was 47 years old. Also living in the house were four of their children aged 21 to 10 years old.2 His occupation was recorded as being a bookeeper in the census.2

In what must be astonishingly bad luck, Donald and Jane had four of their daughters die unmarried between 1847 and 1852. Each was between 19 and 22 years old. Donald Nicholson was a hatter in August 1856.17 Donald, as the father of the groom, attended Donald Nicholson and Elizabeth Ann Medhurst's wedding at St. Philip's on Wednesday, 6 August 1856 at Liverpool.17,1,18

He was recorded as head of household in the 1861 census with Jane Wetherell as his spouse at 9 Chapman Street, Manchester. He was 57 years old.19 His occupation was recorded as being a manchester warehouseman in the census.19 Donald Nicholson was a "Milliner and Bookkeeper, Dealer and Chapman" in March 1863.20,21

On 23 January 1863 Donald Nicholson was declared bankrupt for the second time and was forced to surrender himself to the Registrar of the County Court. A first meeting of his creditors was set up for a date 3 weeks hence at Liverpool.21

On 18 March 1863 Donald passed his last examination and had his bankruptcy discharged.20 On 19 December 1863 Donald Nicholson was scheduled to meet with his creditors for an audit at Liverpool County Court, in Liverpool.22

Donald died on 10 February 1874 at Moss Side, Manchester, at age 69. He died of bronchitis and senectus (old age). Donald lived to see all but three of his twelve children die, all of them before he was 50..24