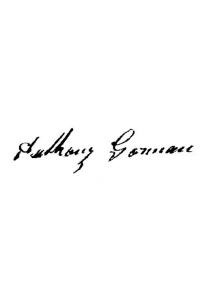 Anthony Gorman's signature from his 1861 marriage certificate
NOTE: The information on this page is my research to date and is subject to change as I become better informed. I very much welcome any corrections or additional info you might have - my email address is at the bottom of this page. Whilst historical facts are not copyright, my writing about these facts are. If you wish to use any text from this site on Ancestry or on any other website, please ask me first - Tim Hill.
+ + + + + + + + + +

Anthony was born on Saturday, 11 May 1833 at Templemore, County Tipperary.1,2 He was the son of John Gorman and Margaret Dwyer.1 Anthony Gorman was a baker in November 1861.3

Anthony, aged 28 and Bridget Therese Bourke became the parents of Peter Gorman on Monday, 20 January 1862 at Hotham, Victoria.4,5 Peter was the first of their six children born between 1862 and 1875. Anthony provided information on the death of Patrick Bourke, on 2 August 1863, at Jeffcott Street, Melbourne, at age 30.6

He owned a succession of publicans licenses between 1872 and 1878; firstly at the Golden Bar Hotel in Lumpy Creek in the Carcoar district, then in the town of Home Rule about 200km north where he had the Bell of Union Hotel (and later changed it's name to the Golden Bar). In 1875 he was the publican for the Wrighton Hotel in Copes Creek (another 450km north), the license of which which was transferred to his wife's brother Patrick in 1876. He moved on to the Commercial Hotel in the same area, and then from there to the Telegraph Hotel in Inverell in 1878.7,8,9,10,11,12 He had a cashbox stolen from him in 1873.13

In September 1876 he was fined a small amount for allowing billiards to be played in his licensed public house without permission.15 Anthony Gorman and another person had a mineral lease that was 'returned to this Department [of Mines], the Lessees having failed to execute and take delivery thereof' on 4 January 1877 at Atkinson's Gully, in Tingha, New South Wales.16

On Monday, 29 April 1878 Anthony's wife Therese gave birth to a daughter at at the Royal Hotel in the tin mining town of Tingha, New South Wales.17

He sufferred a theft on 3 June 1878:
"Stolen, on the morning of 3rd instant, from the "Golden Bar Hotel," Home Rule, Gulgong, the property of Anthony Gorman,-a new pair of striped chocolate tweed trousers, spot of grease inside right knee, pair braces marked "J.B." and £2 7s. Identifiable."18
He and Michael Bourke were brother-in-laws and were perhaps carrying on a business together as publicans circa 1882 at Inverell, New South Wales.19 A publican's licence was transferred to him for Clarendon Hotel in Elizabeth Street, in Sydney.20,21

Anthony Gorman had a ledger stolen by Denis McBrearty on 6 December 1883 at the corner of Park and Elizabeth streets, in Sydney.22 Anthony and Bridgetlived in 1884 at New Zealander Hotel in Park Street, in Sydney.19 The Licencing Court transferred his licence in the Clarendon Hotel, Park Street to James Conbery (although other documents say Mr. Cowie) for £3,300.23,19 Anthonylived in 1886 at at Matilda Terrace Oatley Road in the Sydney suburb of Paddington.24

Anthony was mentioned in a newspaper article on 3 September 1887:

Anthony Gorman, late licensee of the Telegraph Hotel, Inverell, now of Sydney, was summoned before the Licensing Bench for having abandoned his licensed house. Defendant failed to appear, consequently the license was cancelled. This hotel, previous to the last few months, was known to be one of the most profitable hostelries in New England. A general falling-off of business and the opening of new hotels brought about the present result.27'
He was subject to an insolvency proceeding meeting on 13 September 1887 at Inverell, New South Wales.28

He was again involved in the courts on 3 December 1887:

Mr. C. B. Stephen, instructed by Mr. Elliott Meyer, appeared for the plaintiff, and Mr. Rogers, instructed by Mr. H. J. Brown, for defendant. This was an action brought by Jane Russell against Joseph Wood to recover damages for alleged wrongful conversion of goods by defendant. The plaintiff is the owner of certain premises at Inverell, of which one Anthony Gorman was tenant. Gorman having got into arrears with his rent, plaintiff put a bailiff into possession of Gorman's furniture and effects. While the goods were so impounded, the defendant entered tho premises and seized and carried away the goods, and it was for this conversion that the plaintiff sought to recover damages. Defendant denied that the goods were in the possession ot the plaintiff when he seized them.
A verdict (by direction of his Honor pro forma) was returned for plaintiff for £355 17s. 4d , with leave resolved to the defendant to move to enter a verdict for him, or for plaintiff to increase the amount of damages.29'

Anthony was further subject to these complicated circumstances on 25 June 1888:

'RAILTON V. WOOD.
'Mr. Rogers, Q.C., and Mr. Heydon, instructed by Messrs. Ellis and Makinson (for Mr. Brown, of Newcastle), appeared for the defendant (appellant), and moved to make absolute a rule nisi for a new trial. Mr. Pilcher, Q.C., and Mr. C. B. Stephen instructed by Mr. Elliott Meyers, appeared for plaintiff to show cause. There was also a cross application on behalf of the plaintiff for an increase of damages. It appeared that Mrs. Railton, the plaintiff, was the landlady of a person named Anthony Gorman, and on the 2nd August, at 10 o'clock in tho morning, the bailiff of the municipality in which plaintiff's house was situated, went into the house and levied on Gorman's goods for over duo rates. At 11 o'clock on the same day the same bailiff purported to distrain for rent due to Mrs. Railton. On the 4 th August, Gorman became insolvent, and on the 7th or 8th August, the defendant took possession of Gorman's goods under his bill of sale, and removed them from the premises, the goods being the same as those which had been distrained upon for municipal rates and rent. Plaintiff thereupon brought an action against the defendant, and recovered a verdict for £355 14s. 4d., and it was now sought to make absolute the rule nisi for a now trial, on the following grounds :-1. That on the making of the order for sequestration of Anthony Gorman's estate the plaintiff's distress for rent was at an end, and could not be further proceeded with; and that the defendant was entitled to take possession of and remove his goods which had been levied on under the said distress. 2. That the fact that the bailiff was already in possession of the goods under a distress for municipal rates prevented a subsequent distress for rent possession under the distress for municipal rates had with-drawn from such possession. 3. That the bailiff, being in possession under a distress for municipal rates, could not also be in possession under the plaintiff's distress for rent; end that the defendant was therefore entitled to succeed under the second plea. 4. That the learned Chief Justice was in error in holding that, under the second plea, the defendant could not give evidence of informality in making the distress, or evidence showing that the distress was not duly authorised, and the distress warrant bad.

The case stands as part heard.

Jury Court.-(Before his Honor the CHIEF JUSTICE and a jury of four.)30'

Anthony again was involved in the courts on 27 September 1888:

(Before his Honor Mr. Justice Deffell.)

Re Anthony Gorman, special for proof. In reply to questions by Mr. Slattery, who appeared for some of the creditors, insolvent said that previous to his insolvency he was the licensee of the Clarendon Hotel, and had since sold his right and interest to a Mr. Cowie for £3300. This was about three years ago. He paid that money into the Bank of New South Wales the head office. He had a son who was now the licensee of tho New Zealand Hotel in Park-street. His son who took this hotel about three years ago was about 23 years of ago, had never been in any occupation from the time he left school until he became licensee of this hotel. To the best of his belief his son paid about £700 in cash for this hotel, and the money was advanced to him by his (insolvent's) wife. He did not advance any money to his son, but he gave some money to his wife. He and his wife and children had been living for the last 13 months with his son at the New Zealand Hotel, and had paid nothing for board and lodging. In reply to questions by Mr. Shorter (who appeared for in-solvent), insolvent said his wife was separated from him for a time and carried on business for herself while he carried on business as a publican at Inverell. The money which he paid to his wife was paid during their temporary separation. He paid about half of the £3300 to his wine and spirit merchants, and gave £900 of the £1700 lost to his wife. Two debts were proved, and the meeting terminated."

It is difficult to say how much is true (especially regarding the movement of monies) but on balance there perhaps is some truth here.19 A certificate of confomity was granted to him 4 December 1888.31

'Re Anthony Gorman The issue of a certificate was suspended for one day, on the ground that the bankrupt had not produced the requested certificate from the creditors in his former insolvency.33'
Anthonylived in 1893 at at 43 Francis Street in the Sydney suburb of Glebe.34 He was associated - perhaps was the publican of the New Zealander Hotel, Park Street in May 1893 at Sydney.35