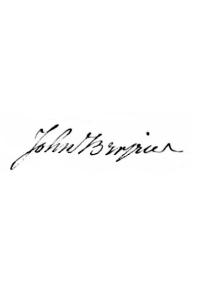 John Berjew's signature from his wedding certificate
NOTE: The information on this page is my research to date and is subject to change as I become better informed. I very much welcome any corrections or additional info you might have - my email address is at the bottom of this page. Whilst historical facts are not copyright, my writing about these facts are. If you wish to use any text from this site on Ancestry or on any other website, please ask me first - Tim Hill.
+ + + + + + + + + +

John was born in 1815 at Hermitage, Dorset.1 He was the son of Charles Berjew and Susan Hooke. John Berjew was baptised on Sunday, 22 October 1815 at Castletown, Dorset.1 He was a schoolmaster in 1839 at Milborne Point, Somerset.2,3

He married Catherine Jane Iles Fooks, daughter of James MacKenzie Fooks and Jane Berjew, in a Church of England ceremony at Parish Church on Wednesday, 11 September 1839 at Melcombe Regis, Weymouth, Dorset. Her husband was also nephew of her mother..2,4,5

John emigrated from London on 5 July 1840 on the 'Waterloo' with his wife, his brother-in-law and his mother-in-law.6,7,8 After a voyage of about 5 months John arrived at Port Adelaide, South Australia, on 9 November 1840 with his family.7,9,8

On 7 July 1846 he wrote a letter to the Colonial Secretary regarding a vacancy in the Postmaster General's Department. It included a letter by six signatories attesting to his qualification due to "long residence and knowledge of the town."10

On 5 September 1846 they published an advertisment in the Adelaide papers:
North Adelaide Academy, Kermode-Street
Mr J. Berjew (late conductor of Milborne Port Academy, Somersetshire, England) respectfully informs the inhabitants of North and South Adelaide, that, on Monday the 28th instant, he purposes opening a School for the education of young gentlemen, and trusts, from his experience in scholastic duties, as well as his thorough knowledge of R.F. Hearle's universally approved system of teaching, that those pupils entrusted to his charge will make such progress as will ensure him the liberal support he will make it his study to merit.
The course of instruction includes Reading, Writing, Arithmetic, Grammar, Geography, History, &c., &c., on the following terms: -
Per Quarter £ s. d.
Young gentlemen above eight years of age .. 1 1 0
Young gentlemen under eight years of age .. 0 15 0
Ladies' Seminary
[Alteration of Terms]
Mrs J. Berjew begs to inform her friends that after the 29th instant her terms for educating young ladies above ten years of age, will be 15s per quarter, and under ten years, 10s per quarter.12,13
John (and presumably his spouse Catherine) lived in 1848 at Kermode Street, in North Adelaide.14

It seems that John Berjew, a little older than 50, had an affair with his wife's 20 year old niece, Matilda Louisa Fooks, resulting in the birth of Charles Albert Thompson Fooks. This may explain why John's occupation went from schoolmaster to cab driver and his family moved to Stanley on Tasmania's North West Coast.1 John Berjew was a 'carman or cab driver' in October 1857.3 He was a schoolmaster circa 1860 at Stanley, Tasmania.17,16 He "arrived at Stanley from Melbourne and established a high class school there, which he successfully conducted for 28 years ... he was a strict disciplinarian, and an able instructor, and a great many of his scholars are now holding high positions in the various colonies."16 On 18 August 1871 they placed an advestisment in the paper in Stanley, Tasmania.

The Stanley Meteor 18 Aug 1871
Photograph by Tim
John and Catherine lived in April 1875 at Stanley, Tasmania.18

John, as the father of the bride, along with Catherine may have attended the wedding of Eleanor and Sydney Harnett Wragg, a farmer, in a Church of England ceremony at St. Paul's on Monday, 14 April 1879 at Stanley, Tasmania.. Others who may have attended include . Sydney and Eleanor went on to have five children together.17,19 John (and presumably his spouse Catherine) lived in 1884 at Burnie, Tasmania.15,16

John Berjew in circa 1890 he suffered a "stroke of paralysls, and with the exception of short intervals was paralysed and quite helpless and unconscious until his death" circa 1890.16

An obituary was published after his death.20