He was born at 64 North Road, Preston, Lancashire on Saturday 18 July 1846 and was baptized at St. John five weeks later.
At the age of 5 he was living with his parents and sisters Ann, Lizzie, Emma and Patty at 13 Great Shaw Street, Preston.

He married Sarah Rowe, daughter of Henry Rowe, at Manchester Cathedral on Saturday 21 September 1867 at Manchester. They had a son soon after, their only child.

In 1880 they were living in Pennsylvania and he was working as a mat manufacturer.

Frederick's wife evidently died because he married a woman called Rose in 1890. By 1895 they had moved to Indiana where they spent the rest of their lives. Tragedy struck - their son, a doctor, died in his early twenties. 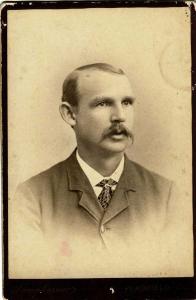 possible photograph of Frederick Horrocks Miller
Obverse:
Fredrick [sic] Horrocks Miller
(Source: M. Willson Collection)
NOTE: The information on this page is my research to date and is subject to change as I become better informed. I very much welcome any corrections or additional info you might have - my email address is at the bottom of this page. Whilst historical facts are not copyright, my writing about these facts are. If you wish to use any text from this site on Ancestry or on any other website, please ask me first - Tim Hill.
+ + + + + + + + + +

He was recorded as living with his parents and siblings Patty (10) and Thomas in the 1861 census at at 35 New Row in the village of Cuerden near the town of Leyland, Lancashire; he was recorded as being 14 years old.8 Frederick Horrocks Miller was a clerk in a cotton mill at Lancashire.4

He may have attended Lizzie Miller and John Jameson's wedding Lizzie and John went on to have four children together at Parish church on Monday, 8 May 1865 at Leyland, Manchester.9,10,11 Frederick Horrocks Miller was a warehouseman in September 1867.12 Frederick and Sarah lived in September 1867 at 59 Warwick Street, in Greenheys, Liverpool.12

He married Sarah Rowe, daughter of Henry Rowe, in a Church of England ceremony at Manchester Cathedral on Saturday, 21 September 1867 at Manchester.. Brothers and sisters who may have attended include Ann Jane Miller, Eliza Miller and Emma Miller. Sarah and Frederick went on to have just one child together.12,13

He may have attended the wedding of his sister in the marriage of James Child Breach and Emma Miller in a Church of England ceremony at St. Peter's on Wednesday, 6 May 1868 Emma's father was a cotton mill manager at Bolton, Lancashire. Emma and James went on to have six children together.14

His mother died 7 September 1869 at the approximate age of 58 years. Frederick was aged 23 when this happened.15

On 11 August 1873 Frederick and his partner Robert Clark dissolved their business partnership in Mill Road, in Everton, Liverpool. They were mat and matting manufacturers, and Robert went it alone.16 In December 1873 Frederick joined in partnership with William Jackson to carry on the business under the name of 'Miller and Jackson'.17

He may have attended the wedding of his sister in the marriage of George Leonard Darby and Patty Miller in a Congregationalist ceremony at the Independent Chapel on Thursday, 5 August 1875 at Ashton upon Mersey, Sale, Cheshire. Neither Patty nor George had surviving parents at the time of their marriage. They went on to have three daughters together, the first born five months after their wedding (similarly, her mother was pregnant when she married).19,20,21

Frederick Horrocks Miller emigrated from England circa 1879.22 He arrived at U.S.A.22

He was recorded as head of household in the 1910 census with Rose (?) as his spouse at Fort Wayne Avenue, Indianapolis, Indiana. He was 63 years old. As on the census returns to follow, basic information provided on date of immigration and age varied wildly and in this cases his age was recorded as 54 years.26 Frederick Horrocks Miller was an insurance salesman.26

He was recorded as head of household in the 1920 census with Rose (?) as his spouse at 1043 Twelfth Street, Indianapolis, Indiana. He was 73 years old. His age was recorded as 60 years.22 Frederick Horrocks Miller was a manufacturer in a carpet factory.22

He was recorded as head of household in the 1930 census with Rose (?) as his spouse at 1030 North Pennsylvania Street, Indianapolis, Indiana. He was 83 years old. His age was recorded as being 80 years old. They also had two lodgers living with them.27