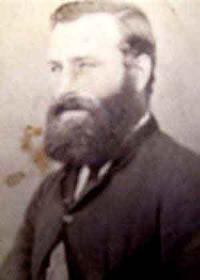 Richard Loane Connell Deane
NOTE: The information on this page is my research to date and is subject to change as I become better informed. I very much welcome any corrections or additional info you might have - my email address is at the bottom of this page. Whilst historical facts are not copyright, my writing about these facts are. If you wish to use any text from this site on Ancestry or on any other website, please ask me first - Tim Hill.
+ + + + + + + + + +

Richard was born on Thursday, 9 June 1842 at Cork.1 He was the son of Kyrl Allen Deane and Mary Lucinda Gregg. He presumably moved with his parents to Boulogne-Sur-Mer, Pas-de-Calais, France, circa 1848.2

At the age of 10 Richard Loane Connell Deane emigrated from London or Plymouth on 12 July 1852 on the 'Prince Regent' with his brother. Despite the young ages of the boys, it isn't known if they were accompanied on the voyage..3,4,5 He arrived on 15 October 1852 at Port Adelaide, South Australia.3,4,5

His father died 14 December 1878 at the approximate age of 78. Richard was aged 36 when this happened.

"Mr. H. E. Bright, M.P., J.P., here took his seat on the Bench.
Edward Henry Dean and Richard Connell Dean were charged with neglecting to contribute to the support of their stepmother, Rosanna Dean. Mr. Stock, for the defendants, produced letters containing money which the Deans had sent to their stepmother, but which had been returned from the' Post-Office, as she had changed her residence. Edward Dean was ordered to pay 3s. and Richard Dean 5s. per week.6'
Richard lived in 1889 at the Sydney suburb of Balmain.1 Richard was employed Union Steamship Company at Sydney in 1912.