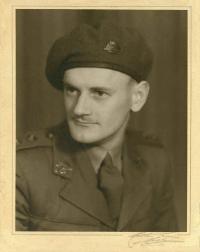 He worked on his parent's strawberry farm at Mount Dandenong Road, in Montrose, Victoria, when young, and coiuldn't eat strawberries for years afterwards.7,8

His father died 1930. He likely lived with his mother and his older brother Hubert in 1931 at at 51 Haines Street in the Melbourne suburb of Glenferrie.9 'Boy' Nicholson and Mavis 'Micky' Oaten met when Mavis and Hubert's sister Jeanne both worked at the Coles Department Store in Glenferrie Road. Jeanne invited Mavis home to their house in Coppin Grove, and it started there. Hubert's teenage brother Bon was also attracted to Mavis, but it was the older Hubert who won out.7

He likely attended the wedding of his brother in the marriage of Hubert Nicholson and Mavis Lily Oaten in a Church of England ceremony at All Saints on Saturday, 17 February 1934 at the Melbourne suburb of Kooyong. Mavis married with the consent of her mother. They went on to have some eight children together, only two of whom reached adulthood.10,11 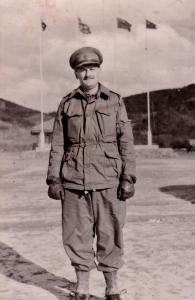 
Brandon Murray Scott Nicholson lived with his brother Hubert and his wife Mavis in 1942 at at 2 Coppin Grove in the Melbourne suburb of Hawthorn.12,8 He was a salesman at Repco.12 It was while working at Repco that Brandon and Caroline met.8

He married Caroline Jean Moore, daughter of Robert Tennant Moore and Ethel Jane Victoria Bell, on Saturday, 3 January 1942 He was 25 and his wife Caroline was 23.. After their marriage, Brandon and Carol lived with Carol's parents at at 6 Kerferd Street in the Melbourne suburb of East Malvern.8 He was an Australian Army officer in 1949.13 Brandon and Carolinelived in 1949 at East Malvern.13 Caroline and Brandon travelled in 1950 to Tasmania. Brandon was in the Korean War.

He would spend R&R time in Japan.14 Brandon and Carolinelived in 1956 at at 5 Pavo St in the Melbourne suburb of North Balwyn. This was a house builf for them by Carol's brother Jim; the family was to remain there for about 9 years.14