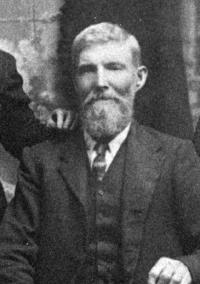 Henry Hosnell 1906
Source: Bob Stephenson
NOTE: The information on this page is my research to date and is subject to change as I become better informed. I very much welcome any corrections or additional info you might have - my email address is at the bottom of this page. Whilst historical facts are not copyright, my writing about these facts are. If you wish to use any text from this site on Ancestry or on any other website, please ask me first - Tim Hill.
+ + + + + + + + + +

By January 1857 the Horsnell family was in desperate circumstances and an appeal was made for charity in January 1857:
"TO THE BENEVOLENT.
THE attention of the benevolent Public is solicited to the case of Mrs. Horsnell, widow of the late Thomas Horsnell, of the Long Swamp, near Mulgunnia who was recently killed by a fall from horse, leaving his wife and seven children almost in a state of complete destitution.
Donations will be thankfully received at Carcoar by the Rev. H. Tingcombe, E. J. C. North, N. Connolly, and B. Stimpson, and by W. Farrand, Esq. Free Press Office, Bathurst."3


He may have attended the wedding of his sister in the marriage of James Brown Nicholson and Lydia Horsnell at St. Michaels and St. Johns Catholic Cathedral on Sunday, 20 August 1871 at Bathurst, New South Wales. Lydia was ten years younger than James.. James and Lydia went on to have 12 known children together.4 In 1906 the surviving Hosnell siblings posed for a photograph.5

Hosnell siblings 1906: from left to right, Elizabeth, Lydia, Henry, Sarah, Lucy and Mary.
Source: Bob Stephenson
Henry was employed as a labourer at Wrightville, in the district of Cobar, New South Wales, in November 1910.6

Henry died on 24 March 1927 at the Gosford suburb of Springfield, New South Wales, He had been 'laid by' for four years, and bed-ridden for 10 months.7,8