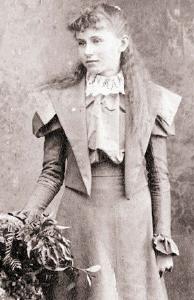 Mary Nolan McLennan
(source: unknown)
NOTE: The information on this page is my research to date and is subject to change as I become better informed. I very much welcome any corrections or additional info you might have - my email address is at the bottom of this page. Whilst historical facts are not copyright, my writing about these facts are. If you wish to use any text from this site on Ancestry or on any other website, please ask me first - Tim Hill.
+ + + + + + + + + +

William was granted a lease of 18,000 acres off Wirlong Station for the purpose of holding stock he needed for his butchering trade. In the early days of the lease William and Mary would often spend a weekend on Glenwood with no long-term grazing ambitions. However, as the town of Shuttleton went into decline, William and Mary spent more time at Glenwood and eventually built a house there.4

The original house was burned down in 1918 and another built soon after. In 1917 William became the first landholder in the Nymagee district to grow a crop and although he had more failures than successes, he persevered putting a crop in every year.4 Mary and William lived in 1930 at Shuttleton, New South Wales.5 The Nicholson's were a hard-working family but like most people of their generation enjoyed a simple social life with a love of sports; especially tennis, cricket and anything to do with horses. Tennis and cricket were played at Glenwood and dances held in the woolshed and the "Big Room" at night.4