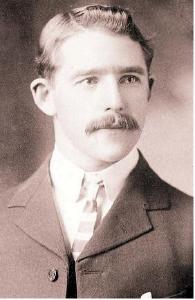 William Henry Hosnell Nicholson
(source: unknown)
NOTE: The information on this page is my research to date and is subject to change as I become better informed. I very much welcome any corrections or additional info you might have - my email address is at the bottom of this page. Whilst historical facts are not copyright, my writing about these facts are. If you wish to use any text from this site on Ancestry or on any other website, please ask me first - Tim Hill.
+ + + + + + + + + +

William was born in 1882 at Mount Hope, New South Wales.1,2 He was the son of James Brown Nicholson and Lydia Horsnell.

"They came to Mount Hope on a horse and dray. Auntie Maggie (Margaret Grogan nee Nicholson) and Uncle Jim (James Hosnell Nicholson) were both kids at the time, in those times there were no roads, just tracks through the Mallie, no water. They carried a square 100 gallon tank with them for their water and filled it whenever it rained, or if they heard of a tank 3 and 4 miles off the road they would go into fill up at the tank. They travelled mostly at night to try to preserve the water and the benefit of the horses. When they eventually got to Mount Hope they first of all lived at 17 mile tank Coan Downs Station and grandfather (James Brown Nicholson) got a job working on the station for a pound a week and rations for his family which they called in those days "ten-ten-two and a quarter" - ten pound of meat, ten pound of flour, two pound of sugar and a quarter of a pound of tea. Anything else they required they had to buy from the store on the station. All big stations had stores those days.
It was a very dry time and he was ordered by the station manager not to give a traveller with a horse or pack horse a drink of water for their horse. But old grandfather gave everything a drink that came along. The station manager came out one day and caught him giving a traveller a drink for his horse and he got the sack. Well they went from there up to Central which in later years became a sort of suburb of Mount Hope and they built a bit of a shack out of timber from the bush in the paddock there alongside a row of hills which is still today called Nicholson Hills. That's where Dad (William Henry Hosnell Nicholson) and Uncle Jack (John Nicholson) were born. They eventually shifted from there up to Central itself and grandfather opened a butcher shop there and later another butcher shop at Mount Hope and then later on they had a butcher shop at Mount Allen. That was considered real big in those days, it would be like Tancreds today. From there they came to Shuttelton where dad and Uncle Jim opened a butcher shop and Uncle Jack went onto Nymagee and he opened a butcher shop there and eventually a hotel".3


He married Mary Nolan McLennan, at Shuttleton in 1907 at Nymagee, New South Wales..4

The following is an interview with one of his children in 1910:

When did they move out there?
Well Dad only put in for the block to have a paddock to hold his killing sheep, he wasn't interested in the land at all. He used to go out and spend his spare time there and Mum use to go out there with him and they would stay for the weekend. Eventually they stopped there. They didn't really draw the block in the first place with the idea of ever living there, it was just to run his killing sheep for the butcher shop. He lived there for most of the rest of his life and the block is still in the family. Three generations of Nicholsons have lived there and still live there."3

William was granted a lease of 18,000 acres off Wirlong Station for the purpose of holding stock he needed for his butchering trade. In the early days of the lease William and Mary would often spend a weekend on Glenwood with no long-term grazing ambitions. However, as the town of Shuttleton went into decline, William and Mary spent more time at Glenwood and eventually built a house there.5 William lived circa 1915 at Glenwood Station, in Nymagee, New South Wales.5

The original house was burned down in 1918 and another built soon after. In 1917 William became the first landholder in the Nymagee district to grow a crop and although he had more failures than successes, he persevered putting a crop in every year.5 William was employed as a butcher at Nymagee, New South Wales, in 1926.6 William and Mary lived in 1930 at Shuttleton, New South Wales.7 The Nicholson's were a hard-working family but like most people of their generation enjoyed a simple social life with a love of sports; especially tennis, cricket and anything to do with horses. Tennis and cricket were played at Glenwood and dances held in the woolshed and the "Big Room" at night.5