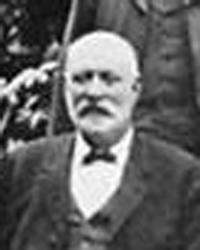 Alexander Charles Deane c1911
NOTE: The information on this page is my research to date and is subject to change as I become better informed. I very much welcome any corrections or additional info you might have - my email address is at the bottom of this page. Whilst historical facts are not copyright, my writing about these facts are. If you wish to use any text from this site on Ancestry or on any other website, please ask me first - Tim Hill.
+ + + + + + + + + +

He married Ann Dunne, daughter of Edward Dunne, on Monday, 4 August 1856 at the Adelaide suburb of Kensington.8 Alexander Charles Deane as a new applicant was apparently granted a licence to run a 'licensed house', The Wheelwright's Arms on 11 March 1857 at Roper Street, in Adelaide.9 However, after only 6 months he transferred the publican's licence to Richard Frederick Frew.10 Alexander and Ann Dunne became the parents of Lucy Deane circa 1859 at South Australia.11 Alexander Charles Deane was was for some years employed with his father on surveying with his cousin, Charles Townsend Hargrave. Afterwards worked in various stations in the far north circa 1860.12 Alexander worked for a couple of years as a shepherd with his future wife Anne Deane.12

A family member states that the children from Alexander Deane's first marriage were looked after by a woman in Walkerville because the second wife Sarah Sheils didn't want to care for them.13

Alexander was recognised for his services by his Order on 3 July 1880:

"On Saturday evening, July 3, at the fortnightly meeting of the Royal Rose of Sharon Lodge. G.U.0.0.F., held at the Fountain Inn, Glen Osmond-road, after the usual business had been concluded, D.G.M. Turner, on behalf of the brothers of the lodge, presented P.P. Deane with a handsome writing desk, in recognition of valuable services rendered by him to the lodge. The desk bore the following inscription:—"Presented to P.P. Alexander Charles Deane by brothers of the Rose of Sharon Lodge for past services, July 3,1880." Tbe D.G.M. in presenting the testimonial referred in laudatory terms to P.P. Deane, and urged other brothers to follow in the footsteps of the recipient. Several past officers supported the D.G.M. in his remarks, and P.P. Deane in a few well-chosen and suitable words thanked the brothers for their kind appreciation of his services."14
Alexander lived in December 1880 at Tomsey Street, in Adelaide.15

His mother died 10 December 1886. Alexander was aged 46 when this happened. He as head attendant gave an opinion on the death of an inmate at the Parkside Lunatic Asylum on 30 June 1892.16 He gave a lengthy statement to the Coroner's enquiry concerning the death of a colleague at the hands of an inmate. on 25 April 1895.17

In April 1900 a boy, Albert Ward, was apprehended for staeling fruit from Alexander in Adelaide and was sent to reform school until he was 18.18 He was head warder circa 1905 at Parkside Lunatic Asylum, in Adelaide.13 Circa 1911 he had a photogragh taken of him with his fellow employees. 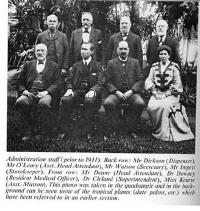