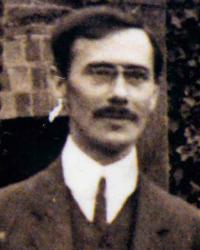 At the age of 8 George emigrated from Glasgow on 3 November 1883 on the 'Loch Katrine' with his parents and three siblings. The ship was described as a 'Magnificent Iron Clipper Ship', and the Nicholsons travelled as second class passengers.5,6,7 George arrived at Melbourne on 4 February 1884. The voyage took a long 89 days. It is reported that the ship was popular, and the passengers had an agreeable time at sea.5,8,6

The Nicholsons were granted 90 acres of land at Tasmania on April 1884.9 He was a student at He was educated at Launceston Training College, an educational establishment run by his mother..10

It was reported on Tuesday, 21 December 1886 that the Olive House Seminary finished its examinations for the year, showing strong improvements on the year before. The school had built a new building during the year allowing double the number of students; Euphemia and Lily were aknowledged by the students, and Lily was mentioned several times for academic acheivments. Evidently males were now allowed at the Seminary, as George received a first class award for bible studies, geography, grammar and composition, English history, Roman history, arithmetic, dictation, drawing.11

In the end of year awards in December 1888 at Olive House Seminary, Charles Leigh Clare, Angus, George and Lily featured highly amongst the award winners.13

On the evening of Thursday, 26 June 1890, the Launceston Training College hosted a reunion at Milton Hall in Fredrick Street, in Launceston, Tasmania. It was estimated that more that 400 people attended. George and Lily performed a violin and piano duet of "Old's new gavotte"; Lily also performed in a number of other acts.14

The students of Launceston Training College gave a concert in aid of their prize fund on Tuesday, 2 September 1890 at Launceston, Tasmania, where "[t]here was a good attendance, and the songs, duets, recitations, and choruses were well received". Lily "who possesses a remarkably sympathetic and cultivated voice, in one so young, which, if not prematurely forced, should in time bring her to the front as a vocalist" sang 'The Better Land' and 'My Mother Binds My Hair' George also took part in the programme with a violin solo.15,16

Charles, George and Lily were awarded honours in the junior class of the Trinity College London musical knowledge examination in March 1891.17,18,19

The Launceston Training College had its annual exhibition on Thursday, 17 December 1891 in Y.M.C.A Hall Brisbane Street, in Launceston, Tasmania. It was so well attended that some were not able to be admitted. Lady Hamilton, the wife of the Governor, was received by Euphemia and Donald. Charles, George and Lily played the violin to acclaim, and George sang "Sion". In the prizes awarded, Lily was seen as the most improved, and also won a special writing prize. Lady Hamilton spoke enthusiastically about what she had seen on her visit, especially the good feeling that existed between the students and teachers, and presented Euphemia with a number of volumes from her Scripture class.20,21,22

Charles, George and Lily attended the school run by their mother. Even at that age, George got a higher score for French than his older brother - but Charles acheived first place for his Trinity College London Examination in Musical Theory, ahead of his sister.23,24 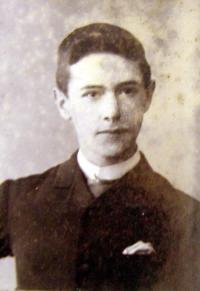 George Gibb Nicholson c.1895
(source: B. L. Nicholson)
George received a degree as a student at Sydney University at Sydney on 1899.10,25

George was mentioned for academic achievement: on 2 May 1899:
At the recent Sydney University examinations, George Nicholson, son of Mr. Donald Nicholson, of this city, took the degree of Bachelor of Arts. He took the University medal, Professor Anderson's prize, and first-class honours in logic and mental philosophy, first-class honours in English, French, and German, Professor McCallum's prize for English, and the law studentship of £50 a year for three years. He was equal with the man who obtained the travelling scholarship of £150 for three years, the scholarship being given to the elder man because he was too old to compete again. Young Nicholson was at one time employed at the Town-hall here, and since going to the Sydney University has, by hard work and perseverance, gained £320 in money prizes alone.
His parents must have been very proud.26 George received a degree as a at Balliol college at Oxford on 1902.10,25

George on Monday, 13 October 1902 he was mentioned in the newspaper on 13 October 1902:
A Tasmanian's Success at Oxford j University. -.Word has just come to hand of the brilliant success of a young Tasmanian-Mr. George G. Nicholson at Oxford University. Mr. Nicholson received his early education at the Launceston Training College; from there he passed to the University of Sydney, where he took first-class honours all through his course, and in his final examination for the B.A. degree, he secured the valuable and much coveted James King, of Irrawang, Scholarship. On this scholarship, Mr. Nicholson went up to Oxford, and entered Baliol College in Easter Term, 1900. At Oxford, Mr. Nicholson surpassed the expectations of his friends in Sydney. In two years, half the usual time, he took the B.C.L. degree .-the stiffest law examination known with the highest honours of his year. Mr. Nicholson is the first, and so far the only Colonial who has secured this difficult law degree, and the fact of his having done so with the highest honours of his college, and in so marvellously short a time, makes a record to be proud of, and is a precedent for future Colonials in the same field of scholarship. Mr. Nicholson is at present reading for a diploma at the University of Paris.27
Whilst studying in England he spent vacations in France, including a tour of Brittany on bicycle, where he acquired a mastery of spoken French.10 He also attended lectures at the Sorbonne/.10

He married Marguerite Marie Danuser, in 1905.25 George lived in 1907 at at Woolwich Road in the Sydney suburb of Hunters Hill.29

In 1909 he published Introduction to French Phonetics which became a standard textbook.10 The Nicholson family posed for a photograph c1910.

His mother died 1915. He was executor of his mother's will in March 1916.30 George and Marguerite (and presumably his spouse Marguerite) lived in 1919 at at Gladstone Avenue in the Sydney suburb of Hunters Hill.3132 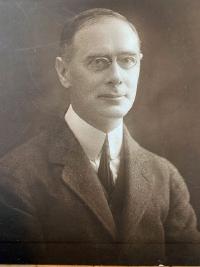 George Gibb Nicholson c.1920
Source: Su Nicholson (his grand-daughter)
George received a degree as a Master of Arts on 1920.10

In 1921 he was appointed to the McCaughey chair of French at the Sydney. he also published his first scholarly book Recherches Philologiques Romanes, published in Paris.10 George provided information on the death of his father Donald Nicholson, on 24 May 1924, at at Mount Street in the Sydney suburb of Hunters Hill at age 48.33 George lived in 1926 at Hunters Hill.34

In 1934 the French government appointed him chevalier of the Légion d'honneur.10

George He was seen as a man of many contradictions. He:
A man of many contradictions, Nicholson left an ambivalent academic and educational legacy. The holder of the first modern language chair in an Australian university, he raised the study of languages to a level of rigour and professionalism unheard of before him. His austere vision was reflected both in his personal demeanour and his educational philosophy. Shy, reserved, distant, forbidding and totally uncompromising, he was known among students as 'Old Nick', 'Gee-Gee' and the 'polite executioner' (his courtesy and indeed his kindness having never been questioned). Nicholson was frequently on a collision course with the Department of Public Instruction as well as the university's administration, and in the second half of his tenure of the chair increasingly withdrew from university politics and life.35

George however:
Those close to Nicholson, however, like his former student and counterpart at the University of Melbourne, A. R. Chisholm, learned to appreciate his undisputed integrity and sense of humour, and held him in deep affection as 'a great, simple, upright, modest man'. From 1908 'and for many years afterwards' Chisholm recalled that Nicholson 'looked about forty; he was dark, lean, ascetic in appearance. He wore dark-rimmed pince-nez that added to a general impression of severity'.36
In 1936 he published his second major book, Un Nouveau Principe d'étymologie Romane.10 George and Marguerite (and presumably his spouse Marguerite) lived at at 8 Mount Street in the Sydney suburb of Hunters Hill. They were living there in the 1940's.32 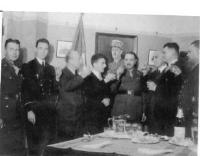