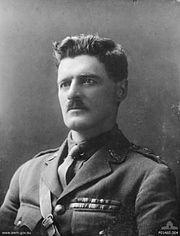 Henry William Murray
(source: Ancestry.com user 'prohealth_1')
NOTE: The information on this page is my research to date and is subject to change as I become better informed. I very much welcome any corrections or additional info you might have - my email address is at the bottom of this page. Whilst historical facts are not copyright, my writing about these facts are. If you wish to use any text from this site on Ancestry or on any other website, please ask me first - Tim Hill.
+ + + + + + + + + +

Henry was born on Wednesday, 1 December 1880 at the small Tasmanian town of Evandale.1 He was the son of Edward Kennedy Murray and Clarissa Littler. He initially went to Kalgoorlie, Western Australia, but couldn't find work in three weeks, so joined his uncle Henry William Murray who had a wood contract for a local mine.2 Henry William Murray also went by the name of Mad Harry. He was decorated while serving in the military. He was awarded the VC, CMG, DSO and bar, DCM and Croix de Guerre. He was reckoned to be the most highly decorated Australian of the First World War.. He reported for active duty on 1 January 1918.

He married Ellen Purdon Cameron, at Registers Office on Sunday, 20 November 1927 at Auckland, New Zealand.3 At this time his occupation was given as as a farmer. Henry lived in September 1933 at Queensland.4 He reported for active duty on 1 June 1944.