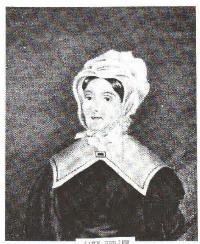 Jane Berjew
NOTE: The information on this page is my research to date and is subject to change as I become better informed. I very much welcome any corrections or additional info you might have - my email address is at the bottom of this page. Whilst historical facts are not copyright, my writing about these facts are. If you wish to use any text from this site on Ancestry or on any other website, please ask me first - Tim Hill.
+ + + + + + + + + +

She married James MacKenzie Fooks, an architect and builder at the start of his career, son of William Fooks and Ann Williams MacKenzie, in a Church of England ceremony on Tuesday, 2 March 1802 at Bradford Abbas, Dorset. She was 24 and her husband James was 21. The wedding certificate was also signed by Mary Ann Barbara Berjew. Others who may have attended the wedding include Catherine Wiltshire as mother of the bride, Samuel Berjew as father of the bride, Ann Williams MacKenzie as mother of the groom and William Fooks as father of the groom. James and Jane went on to have nine known children together.2,3,4 Jane and James lived at 8 St. Thomas Street, Melcombe Regis, Weymouth, Dorset.5

On April 28th 1811 their nine day old son, James' name-sake, died. This must have been deeply distressing to James and his deeply religous wife.6 Just nine months later their first daughter Catherine died, whilst Jane was about six months pregnant. When he was born this child, also called James MacKenzie Fooks was to only live eighteen months. Jane was pregnant again soon, but this son, also with the same name, only lived seventeen months. Of their five children so far, only the first two sons were still alive.5 She presumably lived with her spouse James at Melcombe Regis, Weymouth, Dorset, in 1814.7

Jane's child James received his baptism on Sunday, 30 January 1814 at Up Cerne, Dorset. His family travelled at least 15 miles - a journey of several hours - so he could be baptised in the church his mother's father was rector of.8,9

She was apparently was one of the Grantees of Adelaide Town Acres showing 'Jane FOOKS of Dorset, Widow.18'

Jane, as the mother of the groom, may have attended the wedding of Samuel and Margaret Sarah Westbrook in a Church of England ceremony at St. John the Baptist on Saturday, 20 February 1847 at Buckland, Tasmania. Samuel was 24 and his wife Margaret was 24.. Others who may have attended include Mary Margaret Mason as mother of the bride and Dr. Samuel Westbrook as father of the bride. Samuel and Margaret went on to have four children together, two of whom lived into their adulthood.19,20,21 She was living with her daughter Catherine's family at Stanley, Tasmania, in April 1875.18

Jane died on 15 April 1875 at Stanley, Tasmania, at age 97.22,23 Her body was interred at Stanley Pioneer Burial Ground on 19 April 1875 at Stanley, Tasmania. The Discovery Centre at Stanley has a copy of the Burial Register for the old Stanley Cemetery. Jane FOOKS is not listed in this register but there is a record of a Jane FOSTER aged 97 having been buried at the Old Stanley Cemetery on April 19th 1875. On the presumption that there would not have been two Jane F's of this age buried around this time we can assume that this is the burial record for Jane FOOKS which has been transcribed incorrectly. There is no marker for Jane FOOKS but we can also assume she would have been buried close to the KING Family..18,24