Donald was born in 1834 in Liverpool and apparently lived there with his parents until his early adulthood.

He married Elizabeth Ann Medhurst in a Church of England ceremony in St. Philip's in 1856 in Liverpool. He was 22 and his wife Elizabeth was 19. They went on to have as many as seven children together. He worked as a clerk to a rice importer.

They moved to Manchester and lived with five of his children from a previous marriage aged 8 to 14, and an infant from his second marriage.

He worked as a bookkeeper and as a cashier

At the age of 49 the family - excluding the children from his first marriage - emigrated to Tasmania. His wife ran a private school (which their own children attended) and he worked primariliy as an auditor, accountant, estate agent and bank clerk (and later manager).

Donald died in 1924 in Hunters Hill aged 89. He buried in Field of Mars cemetery. 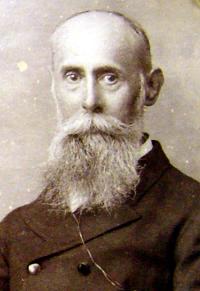 Donald was born on Friday, 6 June 1834 at Liverpool.1,2 He was the son of Donald Nicholson and Jane Wetherell.

He married Elizabeth Ann Medhurst, daughter of Thomas Medhurst and Nancy Ann Cattral, in a Church of England ceremony at St. Philip's on Wednesday, 6 August 1856 at Liverpool. He was 22 and his wife Elizabeth was 19. Elizabeth was the daughter of a glass cutter.. Donald Nicholson attended as father of the groom; others who may have attended the wedding include Nancy Ann Cattral as mother of the bride, Thomas Medhurst as father of the bride and Jane Wetherell as mother of the groom. Brothers and sisters who may have attended include Walter Wetherell Nicholson and Parker Nicholson. Elizabeth and Donald went on to have at least five children together.6,2,7 Donald (and presumably his spouse Elizabeth) lived on 9 August 1857 at Crown Street, Liverpool.8 Donald and Elizabeth lived in 1860 at 31 Myrtle Street, Liverpool.9

He was recorded as head of household in the 1861 census with Elizabeth Ann Medhurst as his spouse at Liverpool. He was 26 years old. Also in the house was his wife and three of his children and a servant.10 His occupation was recorded as being a clerk to a rice importer in the census.10

He married Euphemia Scott Gibb, a schoolteacher, daughter of James Gibb and Christian Angus, on Wednesday, 7 October 1868 at Aberdeen..2,11 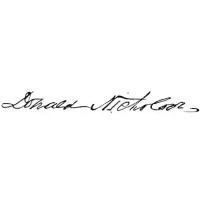 He was recorded as head of household in the 1871 census with Euphemia Scott Gibb as his spouse at 3 Edgar Terrace Hulton Street, Moss Side, Manchester. He was 36 years old. Also in the house were 5 of his children from a previous marriage aged 8 to 14, and an infant from his second marriage.12 His occupation was recorded as being a bookkeeper for yarn agents in the census.12

His father died 11 February 1874 at the age of 69. Donald was aged 39 when this happened.16 Donald (and presumably his spouse Euphemia) lived in June 1878 at Plumley, Cheshire.17 Donald Nicholson was a cashier for Messrs. Chas. Leigh Clare and Co, merchants in November 1878 at 42 Lloyd Street, in Manchester.18

Donald gave evidence in a court case where a fellow employee, a collector, stole 2 cheques totalling £77. He was sentenced to a year's imprisonment.18 Donald (and presumably his spouse Euphemia) lived in December 1879 at Lower Peover, Cheshire.19

He was recorded as head of household in the 1881 census with Euphemia Scott Gibb as his spouse at Plumley Moor, Plumley, Cheshire. He was 46 years old. His age was recorded as 47 years old.15 His occupation was recorded as being a 'cashier clerk to a cotton [??] commission agent and merchant' in the census.15

At the age of 49 Donald and his wife Euphemia emigrated with their four children from Glasgow on 3 November 1883 on the 'Loch Katrine'. The ship was described as a 'Magnificent Iron Clipper Ship', and the Nicholsons travelled as second class passengers.20,14,21 Donald and his wife Euphemia arrived at Melbourne on 4 February 1884. The voyage took a long 89 days. It is reported that the ship was popular, and the passengers had an agreeable time at sea.20,22,14 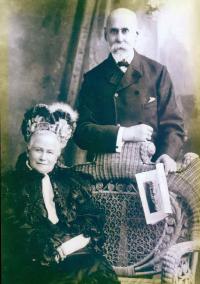 The Launceston Training College had its annual exhibition on Thursday, 17 December 1891 in Y.M.C.A Hall Brisbane Street, in Launceston, Tasmania. It was so well attended that some were not able to be admitted. Lady Hamilton, the wife of the Governor, was received by Euphemia and Donald. Charles, George and Lily played the violin to acclaim, and George sang "Sion". In the prizes awarded, Lily was seen as the most improved, and also won a special writing prize. Lady Hamilton spoke enthusiastically about what she had seen on her visit, especially the good feeling that existed between the students and teachers, and presented Euphemia with a number of volumes from her Scripture class.28,29,30

Donald began working as a private accountant: on 8 December 1894:
NEW BUSINESS.-It is announced in an advertisement in another column of this issue that Mr Donald Nicholson, who is well-known in the city, having been here for 10 years connected with the Bank of V.D. Land, has opened an office at 37 Patterson-street, and is prepared to take accountant's work in general, including the winding up of insolvent estates, posting tradesmen's books, and estate agencies. Mr Nicholson will no doubt secure a share of the public patronage.31,32
He applied to be auditior of the Northern Tasmania Permanent Building Society on 21 February 1895.33

Donald was the estate-agent trying to sell a house.34 He was elected as auditor of the Cornwall Coal Company on 1 May 1896.35

Lily was given a crystal mounted photgraph of the Cataract Gorge at a social on Tuesday, 30 June 1896; Euphemia and Donald both attended.36 He was re-elected as auditor of the Launceston Savings Investment and Building Society on 4 August 1896.37

George was mentioned for academic achievement: on 2 May 1899:
At the recent Sydney University examinations, George Nicholson, son of Mr. Donald Nicholson, of this city, took the degree of Bachelor of Arts. He took the University medal, Professor Anderson's prize, and first-class honours in logic and mental philosophy, first-class honours in English, French, and German, Professor McCallum's prize for English, and the law studentship of £50 a year for three years. He was equal with the man who obtained the travelling scholarship of £150 for three years, the scholarship being given to the elder man because he was too old to compete again. Young Nicholson was at one time employed at the Town-hall here, and since going to the Sydney University has, by hard work and perseverance, gained £320 in money prizes alone.
His parents must have been very proud.38

He was elected auditor of the New Monarch Gold Mining Company.39

In August 1900 he was reelected to be an auditor of the Launceston Savings Investment and Building Society.40

Donald attempted to sell his house: on 27 February 1901:
MESSRS. ALFRED HARRAP AND SON have been favoured with instructions from Donald Nicholson, Esq., to sell by auction at ,their mart, Cameron-street, on MONDAY, 18th MARCH, AT NOON,
W.B. balconied residence, No. 16 Laura-street, Cataract Hill (corner Laura-street and Kinburn street), and containing on the ground floor drawing-room, dining-room, breakfast-room, kitchen, school-room (30 x 15), class-room, scullery, bath, workshop, -which can be converted into a stable, conservatory; splendid flower garden, cement yard, etc., with 4 rooms on the upper floor, and the whole is in an excellent state of preservation. Land, 57ft. on Laura-street ,by 133ft. on Kinburn-street; also, a separate allotment of orchard land, 100ft. by 100ft. in Kinburn-street.
Title perfect.
Further particulars on application to the auctioneers.41,42,43

Two youths who had stolen 15s worth of carpentry tools from the Nicholson household were taken to Police Court. Donald, suffering from about of influenza, declined to prosecute due to the age of the accused.44,45

Donald, as the father of the groom, along with Euphemia attended the wedding of Charles and Louise Augusta Fookes in a Church of England ceremony at St. Martin's Church on Sunday, 8 December 1907 at Queenstown, Tasmania. Charles was 35 and his wife Louise was 27. And Rev. Henry Samuel Cox Fookes as father of the bride. Louise and Charles went on to have three children together.13

Donald was involved in a court case concerning a begger called John Long: in March 1908:
"Long, it appears, went to Mr D. Nicholson, the bank manager, and asked for money to obtain food. He was handed a shilling, but regarded this a mean gift, considering that Mr Nicholson was manager of a financial institution. Then he asked for an old cap, but here Mr Nicholson became suspicious, and got rid of his caller, afterwards reporting the matter to the police. Detective-Sergeant Bain sarched out Long, and taxed him. Long protested that he had not asked anyone for money. Next he was confronted with Mr Nicholson, who at once recognised Long. 'Here, that'll do,' exclaimed Long. 'Don't you put up a tale about me. You never saw me before in your life, or I never saw you.' 'You are a bad man,' replied tbe astonished bank manager. 'Why, didn't you ask me for an old cap?' 'No,' I didn't,' indignantly proclaimed Long. 'What would I wan't to ask you for a cap for? Haven't I got one of my own'; and Long pulled a rather well-worn cap from his head and proudly, held it up for exhibition. Later on, however, the Bench was satisfied that Long was an offender, and he was dealt with as already indicated."49
He was appointed as a Justice of the Peace on 3 May 1909 at Queenstown, Tasmania.50 The Nicholson family posed for a photograph c1910.

Donald and Euphemia lived in 1914 at Orr Street, in Queenstown, Tasmania.52 Some of the extended family posed for a photograph in circa 1915 at [Q]. 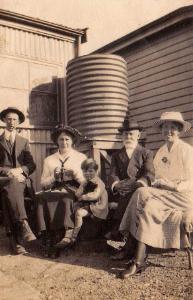 
His wife Euphemia died 1915, leaving him a widower. Donald Nicholson was to be Officiant at the 25th anniversary service on 3 June 1917 at Holy Trinity Church, in Strahan, Tasmania.54 He retired as manager of the Commercial Bank of Australasia after 45 years of banking service. His place was taken by his son-in-law Albert Henry Fooks on 1 October 1919 at Queenstown, Tasmania.55 Donald arrived at New South Wales in 1920.14

Donald died on 24 May 1924 at at Mount Street in the Sydney suburb of Hunters Hill at age 89 of gastroenteritis, cardiac failure and pnemonia, from which he had sufferred for 4 days.11 His body was interred at Field of Mars cemetery on 28 May 1924 at the Sydney suburb of Ryde.11 Donald probated an amount of £1,627 from his deceasd wife's estate to his son George.56