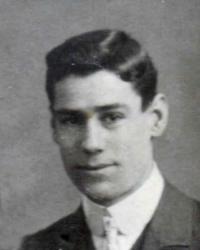 Henry was born on Thursday, 23 January 1896 at the Melbourne suburb of Clifton Hill.1,2 He was the son of Charles Henry Oaten and Catherine Carroll. His common name was Harry.3 He presumably lived with his parents at at 105 Spensley Street in the Melbourne suburb of Clifton Hill in December 1897. This house was a wooden house, marked as 103 in the rate book for this year but likley No. 105 (as was same house renumbered in the subsequent year).4,5

Henry was discharged from the orphanage on Saturday, 17 April 1909 to the care of his brother Albert at at 27 Reilly Street in the Melbourne suburb of Collingwood.13

He may have attended the wedding of his brother in the marriage of Albert Edward Oaten and Violet Barbara Cheyne in a Congregational Church ceremony at at the manse 101 Gore Street on Wednesday, 24 November 1909 at the Melbourne suburb of Fitzroy. Violet needed the consent of her father to marry; both Violet and Albert had lost their mothers in their early teens. Violet and Albert went on to have four children together, three of whom lived to their adulthood.14,15 Henry William Oaten was a boot operator in 1919.16

He may have attended the wedding of his niece in the marriage of Hubert Nicholson and Mavis Lily Oaten in a Church of England ceremony at All Saints on Saturday, 17 February 1934 at the Melbourne suburb of Kooyong. Mavis married with the consent of her mother. They went on to have some eight children together, only two of whom reached adulthood.22,23

He may have attended the wedding of his niece in the marriage of Harold John Neill and Violet Agnette Oaten at St. John's Church of England on Saturday, 20 January 1940 at the Melbourne suburb of Camberwell. Harold and Violet went on to have two children together.24 Henry and Ellen lived in 1949 at Preston.13