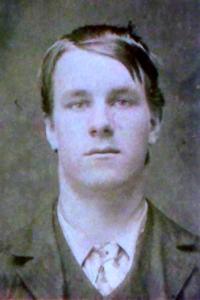 Albert Robert Cheyne
Source: His prison admission 1904
NOTE: The information on this page is my research to date and is subject to change as I become better informed. I very much welcome any corrections or additional info you might have - my email address is at the bottom of this page. Whilst historical facts are not copyright, my writing about these facts are. If you wish to use any text from this site on Ancestry or on any other website, please ask me first - Tim Hill.
+ + + + + + + + + +


The family lived in three houses in quick succession; in 1891 they were firstly at 63 Flemington Road, North Melbourne; then at 16 Gardner street in Richmond, then at 10 James Street Fitzroy where they settled and stayed until the turn of the century. This was a 5 room house owned by a Henry Wernberg.3,4,5,6

In March 1901 at the approximate age of 15, Albert's and a Robert Patchett pleaded guilty to a charge of shop-breaking. They had attempted to break into the shop of Matilda Rutter at the Eastern Market and were caught meddling with a padlock.
They were treated leniently by the court; the judge asked that someone would take responsibility for them for three years. They were given a suspended sentence of 3 months of hard labour at Castlemaine Gaol, and asked for £1 recognisance from both as well as a £25 surety; Robert Cheyne provided this for his son. It was stated that the boys were from respectable parents, and were allowed to go home.7,8,9,10,11 He presumablylived with his parents at at 116 Fitzroy Street in the Melbourne suburb of Fitzroy in July 1901.12,13

He was charged on warrant with larceny of a purse containing 20 shillings that belonged to Effie McParland, one of the assistants at the World's Fair at Exhibition Buildings in Exhibition Street, in Melbourne. He was captured two weeks later.14,15,9 He was described as being 15 years of age, 5 feet 3 inches tall with fair hair and fair complexion.14

He was charged with theft:
Albert Cheyne, aged 16, was charged at the Carlton Court to-day with stealing a purse containing 20s, the property of a young lady assisting at the World's Fair. Mr Kane appeared tor the defence. The evidence was that the purse was stolen from under the table in the Fair by another lad, who handed it over to Cheyne. The latter opened it and found 11s and having got 5s 6d of this sum handed it back to the other lad, who threw the empty purse away. Mr Kane said that the painful feature of the case was the fact that the prisoner had been convicted of a trumpery offence in regard to some show cases at the Eastern Market, and that his honest, respectable father, who had become surety for his good behavior, would have to pay £25 if accused were again convicted whilst the prisoner would have to serve a sentence of three months imprisonment. Counsel contended there was no evidence that prisoner knew the purse had been stolen. Accused was fined 40s. in default of distress one month's imprisonment.16
Albert became a ward of the state. He absconded from the Bayswater Reformatory School, in Bayswater, Victoria, with 3 other boys 6 months later; when recaptured he absconded again with 4 other boys later in the same year.17,18,19

Albert, along with 2 other boys, was charged at the City Court with throwing missiles at a Chinese man in the Melbourne suburb of Carlton. They kept harassing theman until he sought the help of a constable. They pleaded not guilty, and were remanded.1920 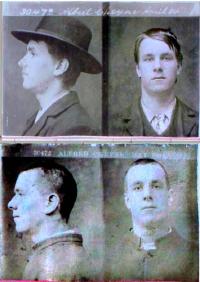 Albert Robert Cheyne
Source: His prison admission 1904
He was Church of England.20

Albert Robert Cheyne was arrested at his home at at 307 Young Street in the Melbourne suburb of Fitzroy for theft, and the house searched.21,22

In 22 March 1904 a stolen silk handkerchief was found in his possession, and he was arrested. It was then that numerous other items relating to other thefts, such "a white silk dress, knives and forks, sheets, razor and a gold watch chain" as well as well as items stolen from someone else; a "watch and chain, keeper ring, trousers and vest, and a black suit" were discovered in his possession. Arthur and Julia Horton were also charged with the same crimes.23

On 23 March 1904 was charged with breaking into the house of Albert Kane and stealing some clothes and other items some 10 days earlier.:
Constables Coakley and Lewis were in Farrell's pawnshop, Victoria-street, Richmond, when Eng land entered to pawn a suit of clothes. As he made contradictory statements he was arrested, and the razors, bearing the name "Kane" on the cases, were found in his coat pocket. He after wards admitted that he and another man com mitted the offence, and that his mate had the rest of the property. Detective Howard subsequently arrested Cheyne, and as Mrs. Horton had, he said, "put the show away," he admitted the offence, and took the police to the Victoria-Street-bridge, where he pointed out the things in a bag secreted under some bushes.24

The four were presented to the court:
[The four were] charged with housebreaking. Last month the houses of Mr Charles Chapman, 30 Windsor street, and William Devine and John Steele, Princes street were robbed. From that of the last named property to the value of £5/9/11 was taken, chiefly wearing apparel; from Devine's, £10 worth, mainly jewellery and from Chapman's, a gold watch, valued at £22. This last-mentioned had been sold by one of the accused for 30/. ... In one case a back door had been burst open, and in the others panes of glass taken out to admit ingress. The property recovered was identified by the respective owners. Accused had been arrested in the city by Detectives Howard and Manning. They reserved their defence and were committed for trial at the coming criminal sessions of the 6th prox.
The prisoners on the previous day were before the Hawthorn Bench, and other charges are pending, against them.25,26
They were brought before Footscray court on 25 March 1904.27 Albert was able to read and write.20 He was a labourer in April 1904.28,20

They were remanded for sentancing:
Mrs Julia Horton, Arthur Horton, Albert Cheyne, and Wm. Thomas, the promising quartette, who were committed for trial at the Footscray Court recently on charges of house breaking and receiving in connection with robberies from the residences of William T. Devine, of Hotham-street, and Charles Chapman, of Windsor-street, Footscray. were found guilty at the Court of General Sessions on Thursday: The evidence was similar to that given at the local court,and the accused were remanded for sentence. There seems no doubt that this gang is responsible for a large number of the numerous suburban robberies reported during the past few months; in fact, they are each charged with several other offences in other districts, and probably there are others that have not come to light. The detective force is to be complimented upon having put a stop to their nefarious doings, and special credit is due to Constable Fitzgerald, of Footscray, who, by his arrest of Thomas, forged the first link in the chain that led to the capture of the gang.29,20

In the Melbourne General Sessions, he was sentanced to 3 years gaol with hard labour on Monday, 18 April 1904. The court recorded that he had nothing to say for himself.28,30 Albert's was originally sent to the Melbourne Gaol at Pentridge.20 On 13 October 1904 he was punished with 48 hours solitary confinement for "shouting out in his cell."20

On Tuesday, 24 January 1905 Albert was transferred to Beechworth Gaol.20 He was described as being 5 feet 9 1/4 inches tall with a freh complexion, brown hair and grey eyes. in April 1906.31

He may have attended the wedding of his sister in the marriage of Henry John Barrett and Lily Hawthorne Cheyne in 1906 at the Melbourne suburb of Fitzroy. Henry and Lily went on to have two known children together.32

He attended the wedding of his in the marriage of Albert Edward Oaten and Violet Barbara Cheyne in a Congregational Church ceremony at at the manse 101 Gore Street on Wednesday, 24 November 1909 at the Melbourne suburb of Fitzroy. Violet needed the consent of her father to marry; both Violet and Albert had lost their mothers in their early teens. Violet and Albert went on to have four children together, three of whom lived to their adulthood.33,34

Albert died after 1 May 1919. He is mentioned in an obituary for his brother-in-law in 1919, otherwise no further records of his life have been found.35