Robert was born to Irish parents in the port town of Greenock near Glasgow, Scotland in 1853. His father died when he young, and his mother had difficulty keeping the family together. At 18 he was a carpenter/ joiner and remained at this trade all his life. He emigrated to New Zealand at 21 where he met a Norwegian, Agnette Sorum, and had children with her. After fouteen years, they sailed for Australia where they had another two children. Agnette died in 1901, followed by their 19 year old son six years later; Robert died in 1913 at the age of 60. 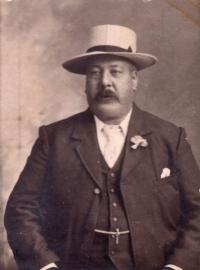 Robert Cheyne
NOTE: The information on this page is my research to date and is subject to change as I become better informed. I very much welcome any corrections or additional info you might have - my email address is at the bottom of this page. Whilst historical facts are not copyright, my writing about these facts are. If you wish to use any text from this site on Ancestry or on any other website, please ask me first - Tim Hill.
+ + + + + + + + + +

Robert was charged with theft and imprisioned on 30 January 1866:
Robert M‘Shane, 14 years of age, and Robert Docherty, 12 years of age, were charged with the theft of vest and a bible, the property of Henry Hamilton Hunt, from board the barque Orange Grove, Saturday last. Both pled guilty, and stated that they went down into the forecastle of the vessel to see if they could get some tobacco but, seeing a chest open, they took the articles. Both bad been previously convicted of theft, and Docherty’s father said he was perfectly agreeable that the son, who was out his control, should sent to the reformatory. Both boys were then sentenced to 14 days’ imprisonment, and thereafter to 3 years in the Reformatory School.2,5

His mother also was involved and was imprisioned for 20 days on 30 January 1866:
Resetting Property Stolen by a Son.— Elizabeth Hawthorne or M‘Shane was charged with the reset of a vest and bible, in the house occupied by her in the Vennel, on Saturday, which articles had been stolen by Robert M'Shane (her son) and Robert Docherty from the barque Orange Grove, she well knowing that the said articles were stolen. Panel pled not guilty. From the evidence led it was shown that the boy M' Shane had taken the articles to his mother. When charged with the reset of the articles, she gave up the bible, but denied all knowledge of the vest. When being about to be locked up she told that she had hid it in ashpit, where it was found torn all to pieces She was found guilty, and sentenced to be imprisoned for 20 days.2,5

If the sentence was carried out, then Robert was imprisioned until mid February, and then in the reform school until Feb 1869.2

A named Robert Cheyne was charged with drunkenness at the magistrates court on Thursday, 17 September 1874 and fined 10 shillings, with the option of three days jail.9

A Robert was brought before the City Police Court on Thursday, 10 February 1876 on a charge of drunkenness, and was fined 5 shillings.10

A man named Robert Cheyne had an overcoat and a pair of boots stolen from him in March 1877. The thief, John Cahill, was sentenced for this and other offences to 3 months imprisionment with hard labour for each offence.11 Robert (and presumably his spouse Agnette) lived in 1880 at Dowling Street, Dunedin, Otago, New Zealand.12

The four births recorded to Robert and Agnette in New Zealand (and their first child born in Australia) are all recorded under the surname 'Sorum'. Was this a reflection of them being unmarried? Or an issue with record keeping?

Robert was found insolvent by the Supreme Court on Friday, 29 April 1881 with liabilities of £103 but assets of only £20. He was due to meet with his creditors in the following week.13,14

He may have married Agnette E. Sörum, daughter of Evan Evanson, circa 1882 at New Zealand. Robert's death certificate indicates that he was married at the age of 29, and Agnette's stated she married at age 28. However, the birth certificate for their second child (born in 1884 when they were both older than these stated ages) indicates that they were not, at least at that stage, married..3,15,16

On Friday, 24 March 1882 in the Resident Magistrates Court, an A. Sorum claimed £5 2s from an R. Cheyne - was this Robert and Agnette? The defendant didn't appear and so was required to pay the outstanding amount with 14 days, or do a week's gaol time.17 Robert (and presumably his spouse Agnette) lived in 1887 at Castle Street, Dunedin, Otago, New Zealand.18

Robert Cheyne signature
Source: his daughter's wedding certificate 1889
Robert and Agnette E. Sörum became the parents of Violet Barbara Cheyne on Thursday, 11 April 1889 at Flemington Road, in North Melbourne, Victoria. Violet was probably born at home. On her birth certificate, Violet has the fore-names of "Violet Barbara Cheyne" and the place where her father's details and the date and place of their marriage is blank (so her birth is listed under her mother's surname). However, Robert Cheyne is the informant and stated he was the father. It may be that this was due to two factors. Firstly, Robert may have felt that he was somehow still liable for repercussions due to his run-ins with the law when he was a teenager, and because he and Agnette were likely unmarried..19

The family lived in three houses in quick succession; in 1891 they were firstly at 63 Flemington Road, North Melbourne; then at 16 Gardner street in Richmond, then at 10 James Street Fitzroy where they settled and stayed until the turn of the century. This was a 5 room house owned by a Henry Wernberg.20,21,22,23 Robert Cheyne witnessed the confirmation of his daughter Lily Hawthorne Cheyne on 11 July 1897 at St. Peter's Eastern Hill, in Melbourne.24

In October 1898 the railways accepted his tender for the contract "for the construction of the sliding doors of four corridor cars, labor only, at £87 10s."25

In March 1901 at the approximate age of 15, Albert's and a Robert Patchett pleaded guilty to a charge of shop-breaking. They had attempted to break into the shop of Matilda Rutter at the Eastern Market and were caught meddling with a padlock.
They were treated leniently by the court; the judge asked that someone would take responsibility for them for three years. They were given a suspended sentence of 3 months of hard labour at Castlemaine Gaol, and asked for £1 recognisance from both as well as a £25 surety; Robert Cheyne provided this for his son. It was stated that the boys were from respectable parents, and were allowed to go home.26,27,28,29,30 He presumably lived with his spouse Agnette at at 116 Fitzroy Street in the Melbourne suburb of Fitzroy in July 1901.16,31

His wife Agnette died 19 July 1901 at the aproximate age of 50, leaving him a widower.16 His daughter Daisy left Australia of 6 January 1903 as part of a tour of the Pollard’s Lilliputian Opera Company. The was one of about 30 children who visited Manilla, and then went on to Canada.32