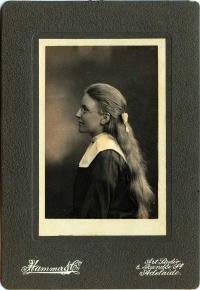 presumed photograph of Dorothy Josephine Darby.
(source: M. Willson collection)
NOTE: The information on this page is my research to date and is subject to change as I become better informed. I very much welcome any corrections or additional info you might have - my email address is at the bottom of this page. Whilst historical facts are not copyright, my writing about these facts are. If you wish to use any text from this site on Ancestry or on any other website, please ask me first - Tim Hill.
+ + + + + + + + + +

Dorothy Josephine Darby was born on 15 December 1887 at Eudunda, South Australia.2,1 She was the daughter of James John Darby and Eliza Maria Watson.1

Dorothy was listed on the roll as a student at Advanced School for Girls, in Adelaide, in October 1904.3

Dorothy Josephine Darby was successful as a candidate in the examinations by the Board of Governors of the Public Library, Museum and Art Gallery of South Australia. on 18 October 1904.3

Dorothy Josephine Darby obtained a University pass in examinations at the senior level in December 1905 at Adelaide.4 The Handorf branch of the Liberal Union held a social 17 August 1911 and the Darbys contributed to the programme.5 She was perhaps a successful exhibitor in a flower-show at on 15 November 1911 at Mount Barker, South Australia.6 She contibuted a musical number to the Handorf branch of the Liberal Union on 15 October 1912 at Handorf, South Australia.7 A photograph was taken of Dorothy when she was a young girl. 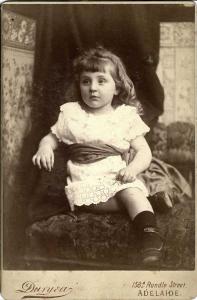 Perhaps it was Dorothy who was accused in May 1948 of income tax evasions totalling £7,805 as a result of a canning business.16

Dorothy was fined £4 with £3/18/ costs for "for having owned Osmond terrace premises which were in an insanitary condition".15