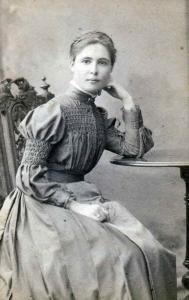 Lilian Richardson c1886
NOTE: The information on this page is my research to date and is subject to change as I become better informed. I very much welcome any corrections or additional info you might have - my email address is at the bottom of this page. Whilst historical facts are not copyright, my writing about these facts are. If you wish to use any text from this site on Ancestry or on any other website, please ask me first - Tim Hill.
+ + + + + + + + + +

Lilian was born circa September 1862 at Bredbury, Cheshire.2,1 She was the daughter of Charles John Richardson and Emma Leonard.1

She was recorded as living with her parents, her mother's mother, a governess and two servants, and her sisters Edith and Marianne in the 1871 census at private house in Guywood Lane, Romiley, Cheshire. She was recorded as being 8 years old.3 Werneth House was reportedly built in 1863, and is still standing. It is a two storey stone freestanding house in Guywood Lane, and was perhaps the house that the Leonards were living in 1871 through 1881. The rooms are large and the ceilings are high; it is evidently an imposing place.