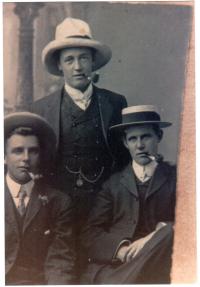 The Smith Brothers; James at back, Ted (?) and Arthur (?) seated
NOTE: The information on this page is my research to date and is subject to change as I become better informed. I very much welcome any corrections or additional info you might have - my email address is at the bottom of this page. Whilst historical facts are not copyright, my writing about these facts are. If you wish to use any text from this site on Ancestry or on any other website, please ask me first - Tim Hill.
+ + + + + + + + + +

Arthur was born on Friday, 20 April 1894 at Yorketown, South Australia.1,2,3 He was the son of Walter Thomas Smith and Lucy Deane. He presumably lived with his parents at Cape Borda, Kangaroo Island, South Australia, in August 1898.4

The Smith family hosted a social evening at their house at Cape Borda, Kangaroo Island, South Australia, for the Cape Borda Christian Endeavor Society, and the three girls and two of the men contributed songs and recitations.5 Arthur Smith was baptised at St. Bedes Church on Friday, 6 September 1901 at the Adelaide suburb of Semaphore. It's not clear why Walter and Lucy waited 5 years to baptise their last child; perhaps they were waiting to return from their remote postings.6

He may have attended the wedding of his brother in the marriage of James Smith and Elsie Florence Darby at Elsie's parent's home at "Kiliora"(?) Stanley St. on Thursday, 22 December 1904 at North Adelaide. Elsie was 5 months pregnant when she married; the effect of this on Elsie's strict Wesleyan Methodist mother isn't known however it is notable that Elsie and James married at Elsie's parent's Adelaide home, far from the town of Mylor where they grew up, and not married in the Congregational church that her sisters were married in. It's also notable that Elsie's mother and her mother's mother were pregnant when they married too.. James and Elsie went on to have four children together, one of whom died young.7 Jim and his brothers Edward and Arthur had their photos taken together c1905.

On Saturday, 18 January 1908 the Smith family departed Harvey's Return, in Cape Borda, Kangaroo Island, South Australia, for their annual holidays. On their journey to Adelaide, a large bushfire was observed on the island.8

He presumably lived with his parents at Kongorong, South Australia, in August 1912.9 Arthur Smith was a labourer in October 1915.3

Arthur Smith began military service on Thursday, 14 October 1915 with the Light Horse at age 21.3 He was described as being 5 feet 8 inches tall, weighing 136 pounds. His complexion was fair, his eyes blue and his hair was dark brown in October 1915.3 He embarked from Australia on Thursday, 10 February 1916 on HMAT Warillda for Heliopolis, Egypt.3

Arthur's brother Edward began military service on Monday, 17 April 1916 with the 2nd Depot Battalion at age 31 His service number was 2031.10 Arthur was transferred to the 5th Divisional Ammunition Column as a gunner.11 Arthur was appointed to be a driver and 'shoeing smith' on 26 May 1916, both roles associated with the artillery's horses.11

He departed from Alexandria and arrived in Marseilles, France, on Thursday, 29 June 1916 afer a 11 day voyage.11 Arthur was serving in France by 27 July 1916 with the in 13th Field Artillery Brigade as a gunner.3

He was charged on 14 June 1917 with 'neglect to the prejudice of good order and military discipline' when he didn't promptly obey an order. He was awarded 7 days of Field Punishment No.2 which usually involved heavy labouring duties, sometimes wearing fetters.17 News was received on Wednesday, 20 June 1917 that his brother Edward was severely wounded and was a prisoner of war in Germany.15,14 Reverted to a gunner on Tuesday, 26 June 1917 at his own request; a week later he spent spent at Trench Mortar School.17


On 20 September 1917 he was transferred to the 50th Battery of 13th Field Artillery Brigade.17 After only a week in his new unit, Arthur was granted furlough on Thursday, 27 September 1917, rejoining his unit on 11th of October.17 Arthur was granted another week's period of furlough on Thursday, 24 January 1918.18 He was decorated while serving in the military on 9 August 1918 at Villiers-Bretonneux, France. He was awarded the Military Medal for 'bravery in the field'. He worked with one other man to repair a gun hit by an enemy shell; the gun continued to be under fire and many casualities were sustained, but Arthur kept working until the gun was repaired.3

One week after the war ended, he was granted 2 weeks leave in England, returning on 2 December 1918.19 News was received in February 1919 that his brother Edward had been returned to England.15,14 Arthur Smith was ill with influenza at the time of the world-wide Spanish flu outbreak in March 1919.19 His influenza caused him to be returned to England on 9 March 1919 and he spent 4 days in The King George Hospital Stamford Street, in London. On discharge he was given 14 days leave before having to report to AIF Headquarters in late March.20

Arthur returned to Australia on 16 July 1919 at age 25 on the 'Durham'.3 Arthur was discharged on Friday, 10 October 1919 at Adelaide.3 He was awarded the 1914/1915 Star, the British War Medal and the Victory Medal in addition to his Military Medal.21 Arthur's brother Edward was discharged from military service on Thursday, 27 November 1919 at age 35.22

Arthur Smith married May (?)23 Arthur lived in March 1930 at the Adelaide suburb of Mile End.24