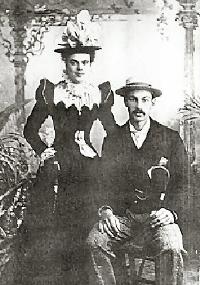 Arthur Chappell was born on 11 September 1878 at Bath.1 He was the son of Edwin Chappell and Harriet Oaten.1 Arthur Chappell Arthur Chappell was born as the last male into the family of Edwin and Harriet Chappell. He was 12 years of age in 1891 when the family were living at 2 Brook Place, Bath. He grew up in the Bath area. He married Elizabeth Florence Clark on Easter Bank Holiday Monday in 1900. After his marriage to Elizabeth Clark, he established a home in a small village (South Stoke) near Arundel and worked as a caretaker at a big house near the church. Arthur and his young wife Elizabeth had six sons. During World War I he joined the Royal Army Medical Corps as a stretcher bearer. He was not a young man at this stage and it would have been a worry for h is wife to have a family of six children with her husband in such danger. He survived but the family structure was to alter some few years later.

Elizabeth died in 1920, Arthur following this event, married a Louisa Pattenden. They had about 26 years of marriage then Louisa passed away at Arundel in 1947.

Arthur next married Rose Clark and went to live with his sister Elizabeth Ada to care for her in her old age. His bride was Rose Clark, his first wife's sister. Rose and Arthur lived in Bath and it was here that she died in 1957 but was buried at Brighton with her spinster sister Edith.1

He was recorded as living with his parents and siblings William, Elizabeth, Albert and Edwin in the 1881 census at 2 Brook Place, Bath.2

Arthur Chappell married Elizabeth Florence Clark at St. Martin's on Monday, 16 April 1900 at Brighton, Sussex. They were 21 and 25 respectively.1