#15035, (circa 1811-2 May 1873)
James McShane was also known as Jemmy.3 NOTE: The information on this page is my research to date and is subject to change as I become better informed. I very much welcome any corrections or additional info you might have - my email address is at the bottom of this page. Whilst historical facts are not copyright, my writing about these facts are. If you wish to use any text from this site on Ancestry or on any other website, please ask me first - Tim Hill.
+ + + + + + + + + +

James was charged with fighting in Broughton Street with Peter Gallacher. He was fined 7s 6d.4 He was a joiner in May 1849.5

James was charged with, while intoxicated, assaulting a seaman and was sent to prison for 10 days.5

He was fined 2s 6d for fighting in Dalrymple Street, Greenock, Renfrewshire, Scotland (with 5 days prison as the alternative.)12

On Wednesday, 27 August 1851 he was sent to jail for 30 days for assaulting someone in Greenock, Renfrewshire whilst intoxicated.13

On 18 November 1851 James McShane fought with a seaman at Greenock, Renfrewshire and was sentanced.14

He was found guilty of assaulting Jane Morton August 1856 by hitting her with a lighted candle. As this was his 30th conviction, he was entanced to 30 days prison with hard labour every second day.15

On November 1856 was sentanced for assaulting Mary and Catherine Kean with a broom handle.16 He was described as 'a dirty old grey headed man' and 'a roan.17,18'

He and Margaret Anderson 'brutally' assaulted Elizabeth Crawford in Greenock, Renfrewshire on Sunday, 16 September 1860; since then Elizabeth had been receiving medical treatment. Although they plead 'not guilty', they were sent to jail for 30 days.20 He was a wright in December 1860.21

James was involved with the law again, this time being assaulted on 22 December 1860:
Mary Ann Montgomery or Fitzsimmons, an elderly denizen of Taylor’s Close, having on Saturday night, when called upon James M'Shane, wright, and deputy house factor in that locality, struck that gentleman in lieu of paying her rent, she was fined in or go ten days to jail. Panel urged hard that she had been "insoolted, and niver heard such disgoosting langwidge in her life she had received from that old blaggard ruffian M'Shane.”.21
He was a deputy house factor on 29 December 1860 at Taylors Close, Greenock, Renfrewshire, Scotland.21

He was recorded as head of household in the 1861 census at 6 William Street, Greenock, Renfrewshire, Scotland. He likely actually lived in Drummers Close which intersected with William street.8 He was a house joiner in April 1861.8 He was a joiner with a bench outside in May 1861.3

He was mentioned twice in the newspaper; firstly he witnessed a fight where he said "they wor fightin' fairly with one another and shapin' up well" Secondly, he was found guilty of assaulting Frances Mclaughlin in Greenock, Renfrewshire on Saturday, 25 May 1861. He was fighting with a woman who lives with him, or as he put it, "washes an' does bits o' things for me"; when he saw Frances and others making fun of him he hit her. He was fined 3s 6d or 7 days.3

He assaulted Janet Hall in Greenock, Renfrewshire on Thursday, 18 July 1861. In his 44th appearance at the bar he plead guilty and was sentanced to 40 days imprisonment. The newspaper reported that:
he received his sentence with air that would do credit to martyr, saying that this would be his last appearance before the court, and gave to understand that it would his last in the flesh, his earthly career being now over, and that wouid no more use the plane and saw, or knock at tenants, doors in the classic retreats of Drummer's Close.22,23

On Saturday, 22 February 1862 he was sentanced to 20 days imprisonment for assaulting Jane Morton in Greenock, RenfrewshireIn reply, James said that:
there was a "riot” in the close which awoke him from the fireside where he had been sleepin’ aff a dhrap o' whisky." Feeling himself, as a Greenock residenter, in duty bound to do his best to preserve the public peace and decorum went out and assisted the police. Here James remarked, parenthetically that though he had acted as police substitute for the last seventeen years, there was no word of his getting a reward or pension. While acting thus as a special constable he saw awoman running down the close. He told her lo home as he was a "substitute.” She seemed averses, so "I gave her her a dhrive and she fell against the wall: I wint home and she went the office an' made a case.” The evidence showed however, that James was nearly blind drunk, and that he struck the woman without any cause, apparently not knowing who or what she was. James, at the bar. seeing the day the going against him, asked the bench "If ye wud throw little fine on me, I'll go to Glasgow an’ be a teetotaler. Ye see I’ll not have so many acquaintances there, for I’ve too many in Greenock." The ballie, not seeing the force of this, sentenced James to 20 days' imprisonment, upon which Janies thanked his honour and hoped that God would bless his pretty face. He then volunteered some information as to his house factoring business in Drummer’s Close, and showed how much he appreciated virtue by stating, "I always act laniently wi’ poor labourin' folks wi’ families, but I make the slaughter houses pay smartly."24,25

On Wednesday, 2 April 1862 he gave evidence in his role of factor in a court case involving a fight between two women. The first witness called:
was James M‘Shane, the Vizier of the locality in question, who in his professional packsheet apron entered the witness box, and leant upon his elbows as he waited meekly for the administration of the oath, which operation he went through with sundry solemn head-shakings and proceeded—
M‘Shane—Thayse wimmen wur in the wan pass, leadin’ to a slaughter-house.
Bailie—What is a slaughterhouse?
James—l'm sure the whole place is slaughterhouses thegither. Men go into houses to be sure, an' go to their ruin, and get choked.
Bailie—But are they killed ?
James No, sir, they recover theyre spache afther being choked, av' coorse they don’t get kilt. Well I was at my dure an’ I heerd cries of "Oh, Jimmy dear, come here an* help me.” So this Mrs Gorman bein’ a married wumman, and havin' two hilder, I win't to make pace. They war both fightin', and Janet said she was sthruck wi' a beetle. Well I left them, an' heerd shouts agin and comes back an' here they wur at it again in the close. It was'nt a cockfight in Ireland, but a raal bull bait, an’ a whole crowd about them.
Fiscal—Were they cursing and swearing, James?
James—Deed sor. they were that throng fightin, they hadn’t time to corse and swear. But sure enough thir was a great noise.
The rest of the evidence made the case perfectly clear against the panels, who were each sent seven days to jail.26
James lived in May 1862 at Greenock, Renfrewshire.27

James was charged with assaulting Adam McMillan, when, as factor, he asked Adam for the rent due. When he was asked to come back, a fight ensued. The charge was ultimately not proven.27,28,29

He was involved in an affray on Thursday, 6 November 1862 at Greenock, Renfrewshire where he was assaulted. The newspaper reported that:
Robert Miller, a grimy-faced fellow, was charged with assaulting James McShane in ahouse in Drummer's Close. James said - I wint into CharleyMcKenna's house last night—it would be between nine and tin o'clock, an' this boy Miller was in sitting at the fireside Says I is that you. He said "Yes". I said “will ye send a gill?*’ He then started and said, "what I to stand you a gill for?” Well, ye see. noticed that the boy was gettin' angered, so held out my han' to him, and sthruck me on the eye, and kicked me on the belly. I never sthruck him. My eye was sore and bleedin’.—Bailie—ls that the reason you did not wash your face to-day? James —Ye see, I had a powltis ofbread to it. Other witnesses corroborating James’ story, Miller was fined in 7s 6d or to go 15 days to jail, James being, at the same time, advised to give up his propensity for getting into rows.30

On Saturday, 24 January 1863 it was announced that had forfeited 10s 6d for assaulting Unity Boyle.31

James was sentanced to 21 days imprisonment June 1863 for breach of the peace.32

On 13 June 1863 he got into a fight with Robert Gedd in Greenock, Renfrewshire after James ejected an unknown person from his house. Each was sentanced to 21 days jail.33

He was sentanced to 30 days gaol for assaulting James Farrie, his 47th appearance before the courts. He is reported to have said by the Greenock Telegraph and Clyde Shipping Gazette, "Well, thank ye, your honour; and the next time i come back, your honour may have the gallows ready for me and hang me at once".34,35

On Tuesday, 10 May 1864 it was reported that he was sentanced to 40 days jail for disturbing the peace Greenock, Renfrewshire (Margaret McPherson, who was with him, got half his sentance).36

He was assaulted Friday, 30 December 1864 by Michael Connelly in Greenock, Renfrewshire who was fined 10s 6d or 15 days.37 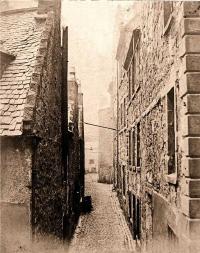 He hit Francis Quinn in the face in Greenock, Renfrewshire on Sunday, 3 September 1865 and was sent to jail for 30 days.40

He was charged with a breach of the peace in October 1865. He said that, as he was drunk, he didn't mind anything about it; when sentanced for 60 days he shouted with joy and thanked God that he would get no whisky for such a long period.9 James lived on 26 January 1866 at Tobago Street, in Greenock, Renfrewshire, Scotland.41

On 24 April 1866 was charged with making an unprovoked attack on James Maloy, and had been 18 times convicted previously. Two weeks later, he plead guilty and was sentanced for 60 days in the Sherrif's court.1,42,43

On 14 June 1866 he sued Archibald McPherson for evicting him and his 4 children 6 months earlier. He was awarded £3.41

On Monday, 17 August 1868 he was remitted to the sheriff for an assault on Mrs McGown, wife of a fireman when he knocked her down and kicked her.44

James appeared in court with a terrier under his coat:
The prosecutor said that M‘Shane was liable to a double penalty for appearing with a dog in his possession. M‘Shane immediately dropped the dog, which ran about the Court.
The Bench—Have you had a dog in your possession since--?
M‘Shane -It’s not a dog, but only half a one, about the size of black cat. Justice Hunter—l think from your appearance (M‘Shane being in state “looped and windowed raggedness”) that you would have enough to do to keep yourself without keeping dog.
Lieut. Burrell and Sergeant Hugh Reid deposed that the dog had been in defendant’s possession for eight or nine months.
The Bench inflicted a mitigated penalty of 25s, and recommended the defendant to take out a license, on which be said that be would rather drown the dog first. The Bench—You bad better sell it. Defendant—Och, I’ll make you a present of it. (Great laughter.)
The Court then adjourned.46

He was apparently accidentially assaulted in Greenock, Renfrewshire om Saturday, 6 May 1871.47

On 30 August 1871 he had assaulted Mary Anne Little at Greenock, Renfrewshire and was remitted to the sheriff; he was sentanced 3 weeks later for 3 months.48,49 He was a joiner journeyman in May 1873.2

James likely died on 2 May 1873 at Poorhouse, Greenock, Renfrewshire, Scotland. It was stated that he was 'single' on his death certificate.2