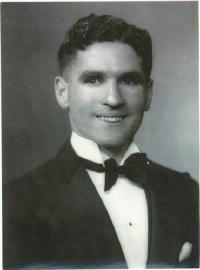 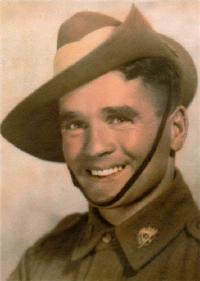 "Jim joined the 2nd AIF on 19th December 1941 in Melbourne. After a short stay at Caulfield Racecourse he was posted to Echuca and then Kapooka where he received his training as an Army Engineer, promoted to the ranks of Corporal.

He embarked on the s.s. "Devonshsire" as a sapper reinforcement for the proposed Alamein campaign in Egypt. Heavy casualties were expected with naval support the convoy of five ships travelled to Fremantle to Colombo (Sri Lanka), where they were delayed for a couple of weeks because of rumours of enemy submarine activity in the area. On arrival in Suez he travelled by train across the Sinai Desert to a training camp at Nuseirat near Gaza in Palestine.

The Australian Governemnt withdrew the 9th Division from the Middle East campaigns as the troops were required for the war against Japan. In January 1943 the training camp was abandoned and the sappers distributed to various sections of the 9th Division for the purpose of returning back to Australia. Jim was posted to the 2/13th Field Company at Beitjergo (Palestine) and remained with the unit for the remainder of the war.

Late January 1943 he embarked on the "Queen Mary" arriving in Sydney in February 1943. After leave he was posted to Seymour and then to the Atherton Tablelands in Queensland for jungle training. Whilst there his unit prepared training facilities at Trinity Beach and Gordon Vale (near Cairns) for the 9th Division to practise amphibious landings for impending campaigns.

He embarked in July 1943 and travelled to Buna via Milne Bay. Here the 9th Division was preparing for the landing at Lae which took place on 4th September 1943. Jim first came under enemy attack as his unit was strafed by the Japanese.

On 22nd Sdeptember 1943 the 9th Division supported by members of the 2nd/3rd Field Company landed at Finchhafen. Casualties were very heavy. Engineer replacements were needed so Jim returned to Buna on an LST. He boarded a destroyer and participated in the second landing in the Finchhafen area. They followed the retreating Japanese up the New Coast to Sattleberg then Sic

In May 1944 the 9th Division was withdrawn from the campaign and returned to the Atherton Tablelands for further training and preparation for the future landings in Borneo. It was here that Jim received word that he father was seriously ill. He received a compassionate discharge and returned back to Royal Park where he received his discharge on 28th November 1944.

After the war Jim played a major role in keeping his army unit together. He was secretary of the 9th Division for forty odd years, spending countless hours organizing reunions, preparing printing and distributing newsletters and organizing social functions such as the annual children's Christmas party. He would drive his truck to Sherbrook Forest to find the best tree."3