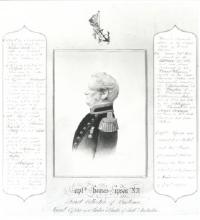 Thomas Lipson
(source: unknown)
NOTE: The information on this page is my research to date and is subject to change as I become better informed. I very much welcome any corrections or additional info you might have - my email address is at the bottom of this page. Whilst historical facts are not copyright, my writing about these facts are. If you wish to use any text from this site on Ancestry or on any other website, please ask me first - Tim Hill.
+ + + + + + + + + +

Thomas Lipson was born in 1784 at Dartmouth, Devon.2,1 He was baptized at St. Petrox on Sunday, 3 October 1784 at Dartmouth, Devon.3,1 At the early age of 10 years enters the Navy as first-class volunteer on board the "Windsor Castle" of 98 guns, captained by Sir T. Byard, with whom he served at the reduction of Corsica. 1797 he served in the Bedford, a ship of 74 guns at the action off Camperdown; in 1798, in the "Foudroyant" with 80 guns at the captures of the French squadron destined for the invasion of Ireland.

24 January 1808 he was nominated acting Lieutenant of the "Sabrina". He was officially promoted June 2, 1809, and in 1810 was made Senior Lieutenant of the "Bonne Citoyenne", a corvette, on the South American station. Lipson was awarded a medal and two clasps for general actions during the war.

Thomas Lipson married Elizabeth Emma Fooks, daughter of William Fooks and Ann Williams MacKenzie, on Thursday, 30 July 1812 at England.1 Thomas Lipson was promoted to Commander on 4 March 1819.4 As of circa 1830, his rank was Captain.1

Upon arrival in the new colony Captain Thomas Lipson was appointed by Govenor Hindmarsh as South Australia’s first naval officer, its first collector of customs, and harbour master of Port Adelaide. He exercised virtually single-handed control over shipping and harbour improvements. He was known as an extremely conscientious official.1,6 Thomas lived in 1838 at Currie Street, in Adelaide. The Lipson's first house overlooked the wharf. Later, in 1838, a house was erected.6 The South Australian Gazette and Colonial Register, August 18 1838, p 2 reports on the Bachelors' Ball at which Captain Lipson, Mrs Elizabeth Lipson and daughters are listed as attending. It is also mentioned that one of the ball stewards was a Mr Allen. Could this possibly have been John Allan, Eliza's future husband? The ball was held to celebrate the anniversary of the passing of the Act of Parliament constituting the province.6 The latter office he resigned in 1840 when he retired on a life pension. Several valuable surveys of the South Australian coast were made by him, and duly acknowledge by the Home Government. 1856 Commander Lipson was promoted to a Post-Captaincy on the Retired List. In his official as well as his private life, he was universally respected and beloved, and it had been remarked that he never made an enemy.

On his retirement from office, a handsome silver tea service, which was subscribed for by persons resident or connected with the Port, was presented to him as a token of the esteem in which he was held, and also as a recognition of the arduous duties which he had to perform connected with the shipping interests in the early days of the colony.

Thomas was lauded in his obituary on 27 October 1863:
"One particular trait in the character of the lamented gentleman should not he lost sight of, and that is that general urbanity and affability which at all times marked his conduct in his intercourse with persons of inferior rank in life. An old acquaintance, though he might he in humble garb, was to him an old friend, and was recognised as such wherever met, and many a time has his warm heart flushed his happy face on meeting a subordinate or tradesman busy about his ordinary duties. Open-hearted, candid, and outspoken himself, he sought and felt delight in association with similar minds, wherever he found them."7
His body was interred at West Terrace Cemetery at Adelaide.8

His will was probated 4 March 1864, with his estate being awarded to Elizabeth Emma Fooks through Frederick Pike of Charing Cross, Navy Agent, her lawful attorney. His effects were valued as less than £600.8