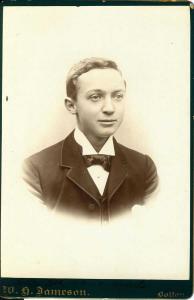 a likely photograph of William Herbert Jameson. Obverse reads:
'Herbert Jameson
Nephew of Mrs. Darby
going to be a Dr.'
(Source: M. Willson Collection)
NOTE: The information on this page is my research to date and is subject to change as I become better informed. I very much welcome any corrections or additional info you might have - my email address is at the bottom of this page. Whilst historical facts are not copyright, my writing about these facts are. If you wish to use any text from this site on Ancestry or on any other website, please ask me first - Tim Hill.
+ + + + + + + + + +

His father died 26 January 1885 at the approximate age of forty four. William was aged 11 when this happened.

He was recorded as living with his widowed mother and siblings Norman, Beatrice and Eric in the 1891 census at 106 Park Road, Bolton, Lancashire. He was recorded as being 17 years old.4 William Herbert Jameson was an umbreller maker's assistant in April 1891.4

He was recorded as head of household in the 1911 census at 4 Deansgate Road, Bolton, Lancashire. He was 37 years old. This house was a two room house.8