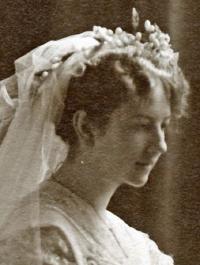 She perhaps attended Shirley, a day and boarding school at the Sydney suburb of Edgecliff as she attended at least one old girl's reunion.5

She married Don Bourke, a successful salesman, son of Michael Bourke and Susannah Alletta Nicholson, in a Presbyterian ceremony at the house of Eleazar Owens on Tuesday, 11 April 1911 at Mandurama, New South Wales. She was 21 and her husband Don was 34. Witnesses to the wedding were Eleazar Owens.6,7

Ivy Pearl Owens was described as being 5 feet 2 inches tall in September 1922.8

Ivy, aged 22 and Don Bourke, aged 35 became the parents of Bessie Patricia Bourke on Friday, 5 April 1912 at at 'Walden'', Pacific Street in the Sydney suburb of Manly.9,10

Ivy and Don lived in 1913 at at 18 Pacific Street in the Sydney suburb of Manly. However, shortly after they seem to have moved to Brisbane.11,12,13 Ivy and Donald lived in 1913 at Flinders Parade, in Sandgate, Queensland.14 Ivy and Don lived in November 1913 at 256 Bowen Terrace, in Brisbane.15 Ivy, aged 23 and Donald Hugh Aloysius Bourke, aged 36 became the parents of Donald Owen Nicholson Bourke on Monday, 17 November 1913 at Brisbane.16,15

Ivy, aged 25 and Don Bourke, aged 38 became the parents of Rowland Hugh Argyle Bourke on Wednesday, 5 May 1915 at Brisbane.16 Ivy Pearl Owens and Donald Hugh Aloysius Bourke moved with with their 3 young children to the Sydney suburb of Manly. Ivy and Don lived in 1917 at at 'Amaroo' 60 (now 34) Addison Road in the Sydney suburb of Manly. Just next door to them was Don's sister Mary and her family; they apparently both moved in to these houses in the same year. The Bourkes were to have this as their home base for at least the next twenty years.17

On Tuesday, 9 October 1917 Ivy entertained Mary Hill, Mary Gahan and three other women in the Winter Garden of the Hotel Australia, in Sydney just before her departure to Melbourne.18 She and Donald Hugh Aloysius Bourke moved to Melbourne in October 1917.18 A photograph was taken of the Bourke and Hill houses in at 32 and 30 Addison Street, Manly c.1918.


Ivy and Don lived in 1918 at Melbourne. By all accounts this was only a short term posting away from his Sydney base by his employer. Apparently there was some acrimony in the way it was done by a Mr. Bennett. NCR was a company that was undergoing increased sales throughout the early years of the century. Just seven years before NCR had sold their millionth cash register.19,20,21

Donald Hugh Aloysius Bourke and Ivy Pearl Owens and his sister Mary and their neighbour Frank Gahan were involved in organising the Blossom dance and euchre party at at Paddington Town Hall in the Sydney suburb of Paddington on Tuesday, 14 October 1919 in aid of St. Margaret's. It seems Mary's husband Joe was not involved in the organising but attended.22,23

Don and Ivy hosted his sister Mary and husband Joseph (and others) at the the Wentworth Cafe, in Sydney on Monday, 17 May 1920, and again on Friday of the same week.24

Ivy and Donald attended at Brighton Hotel in the Sydney suburb of Brighton-Le-Sands in February 1921 along with Don's sister Mary and her husband Joe, Ivy's parents and her brother Owen and his wife.25

On Thursday, 2 March 1922 Ivy Nicholson hosted a birthday party for her young son Donald attended by Ivy and her sister-in-laws Mary and Susie.28 On [D Donald and Ivy attended a fundraising for the Sydney Hospital Nurses Home at Sydney.29 Two weeks later they organised a tea party in the Winter Garden annex of Sydney.30

Donald Hugh Aloysius Bourke stated in a newspaper article that St. Margaret's had the lowest death rate in the world, and that a special effort was being made to raise £5,000. An effort was being made to endow each basinette; basinettes were promised in the name of his wife and his sister Mary.31,32 On Monday, 1 May 1922 Ivy organised a card party at her house 'Amaroo' 60 (now 34) Addison Road in aid of St. Margaret's.33

On Tuesday, 16 May 1922 Donald and Ivy departed for Europe and America on the R.M.S. Ormuz for a six-month leave of absence. This trip was given to him as a reward for his efforts at NCR.34,35

Ivy was entertained by members of the committee of St. Margaret's Hospital before the Bourke's departure overseas.36

In August Donald and Ivy left on a round the world trip. They arrived in London and stayed at the Waldorf Hotel on The Strand, before leaving for New York, arriving on the 22nd of August. Four weeks later they departed San Francisco for the voyage home, stopping briefly at Honolulu.37,38,8

Ivy and Mary attended the races at at Randwick racecourse in the Sydney suburb of Randwick and had their dresses commented on in the papers. Ivy wore "brown with a hat trimmed with Autumn leaves" and Mary's "navy marocain frock was finely beaded and worn with a cloche hat with French flowers."42

Donald and Ivy as well as Joe and Mary Hill (and a number of others) were entertained at a 'gay dinner dance' at Sydney hosted by Sister Kerven on Tuesday, 5 February 1924.43 A week or so later Ivy's husband Don and family friend Val Boyle had a joint birthday party hosted for them by his sister Mary and her husband Joe on Thursday, 14 February 1924 at The Ambassadors, in Sydney. His younger brother Argyle and his wife attended, as did neighbors and close family friends.44 Don and Ivy, his sister Mary and her husband Joe, and their brother Gyle and his wife Daisy attended a Fools' Cap Ball at Sydney on 3 April 1924.45 Ivy and Donald attended the opening night of 'Lucia' at Her Majesty's Theatre, in Sydney on June 1924.46

On Saturday, 7 June 1924 her sister-in-law Susan Georgina Gormon Bourke died of cancer, no doubt a blow for this tight-knit family.47

On Monday, 8 September 1924 Ivy attended a meeting of the committee of the St. Margaret's Hospital held at Sydney, welcoming Mrs. H. D. McIntosh, one of the life goveners. Her sister in law Mary presided at the meeting.48 Donald and Ivy (and his sister Mary) attended a function at Sydney in aid of the Police Hospital Fund.49 By this time they had also had the telephone connected at home (Manly 327), as had the Hill's next door.50 On Monday, 27 July 1925 Donald and Ivy attended the Lord Mayor's Ball at Sydney.51

Ivy and her friends Mary Hill, Ivy Nicholson and Daisy Bourke were among 400 people who attended the 'Beaucaire Ball' at Sydney on Tuesday, 1 September 1925.52

Joseph William Hill and Ivy Pearl Owens were among a large number of people that attended a cabaret at Sydney in aid of St. Margaret's on Thursday, 30 June 1927.53 She and Donald Hugh Aloysius Bourke were found on a passenger list on 18 January 1928 at New York 'Aquitania' departing.54 They travelled further on the 'Berengaria' departing on 1 February 1928 from Southhampton to New York.55 Six weeks later they departed America on the SS 'Aorangi' departing on 14 March 1928 from Honolulu to Suva, Aukland and Sydney.56

Ivy was at least an occasional golfer, but almost certainly not to the degree Don was.58

Her sister-in-law Mary Alberta MacCallum Bourke died on Friday, 27 November 1931 at the age of 52. Mary had been admitted to Mount St. Margaret's hospital in Ryde in August and died of cardiac failure four months later.This was no doubt a time of grieving for Ivy as the Hill and Bourke families had been very close.59

In Donald Hugh Aloysius Bourke's will, his wife Ivy Pearl Owens was named sole executor by Donald to handle his estate on 6 September 1932 at Sydney.60 Ivy and Don lived in 1936 at "Amaroo'.61 Ivy and Rowland lived in September 1939 at at 61 Greenknowe Flats in Greenknowe Avenue in the Sydney suburb of Potts Point.62

In Rowland Hugh Argyle Bourke's will on 2 January 1940 at Ingleburn Army Camp, in Ingleburn, New South Wales, Bessie Patricia Bourke and Ivy Pearl Owens were named as heirs. He left everything to his mother, but in the event she had died, everything was to go to his sister.62

Ivy's son Donald began military service on Friday, 14 November 1941 at the Sydney suburb of Paddington at age 27.65 Ivy lived in August 1942 at Potts Point.63 She was listed as a beneficiary in Rowland Hugh Argyle Bourke's will on 12 February 1943 at Supreme Court of NSW, in Sydney.62 Ivy, as the mother of the groom, attended Donald Owen Nicholson Bourke and Leila Peard Barker's wedding at St. Thomas' on Saturday, 20 April 1946 at the Melbourne suburb of Essendon.66 Ivy and Bessie lived in 1949 at at 2 Greenknowe Avenue in the Sydney suburb of Potts Point.67