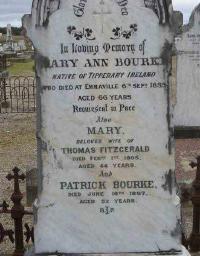 She may have married Patrick Bourke, in 1842 at Tipparary, Ireland.5,6

Mary and her husband Patrick emigrated with their daughter from Cork circa 7 November 1843 on the "Royal Consort" with their daughter. Some of the passengers on the Royal Consort seem have come from the Burhampooter which was shipwrecked - were Patrick and his family amongst these?2,7 At the time of their emigration, both Patrick and Mary were illiterate. Patrick was still signed his daughter Bridget's marriage certificate with a cross 18 years later.2,8 At this time her occupation was given as a housemaid.2 After a voyage of 103 days Mary and her husband Patrick arrived at Port Phillip, Victoria, on 18 February 1844.2,7

Her husband Patrick died 3 August 1863 at the aproximate age of 63 years, leaving her a widow. On May 1883 people with the same names as Michael Bourke and James Bourke from the Emmaville district gave money to the Irish National League - perhaps it was this family.15