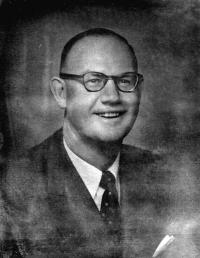 His common name was Bill. Donald was born at 256 Bowen Terrace on Monday, 17 November 1913 at Brisbane.2,1 He was the son of Donald Hugh Aloysius Bourke and Ivy Pearl Owens.1 He presumably moved with his parents to the Sydney suburb of Manly. He lived with his parents at at 'Amaroo' 60 (now 34) Addison Road in the Sydney suburb of Manly in 1917. Just next door to them was Don's sister Mary and her family; they apparently both moved in to these houses in the same year. The Bourkes were to have this as their home base for at least the next twenty years.3 He presumably moved with his parents to Melbourne in October 1917.4 A photograph was taken of the Bourke and Hill houses in at 32 and 30 Addison Street, Manly c.1918.

The Bourke and Hill houses in Addison Street, Manly c.1918
(source: Tim Hill collection)
He lived with his parents at Melbourne in 1918. By all accounts this was only a short term posting away from his Sydney base by his employer. Apparently there was some acrimony in the way it was done by a Mr. Bennett. NCR was a company that was undergoing increased sales throughout the early years of the century. Just seven years before NCR had sold their millionth cash register.5,6,7 By this time they had also had the telephone connected at home (Manly 327), as had the Hill's next door.8

In Rowland Hugh Argyle Bourke's will, his brother Donald Owen Nicholson Bourke was named sole executor by Rowland to handle his estate on 2 January 1940 at Ingleburn Army Camp, in Ingleburn, New South Wales. He left everything to his mother, but in the event she had died, everything was to go to his sister.11 Donald was employed the Vacuum Oil Company at Sydney in January 1940.11 Donald lived in 1941 at Hydro Hotel, in Leeton, New South Wales.12 He lived with Don Bourke in June 1941 at at 'Greenknowe Flats' Greenknowe Avenue in the Sydney suburb of Potts Point.13

Donald Owen Nicholson Bourke began military service on Friday, 14 November 1941 at the Sydney suburb of Paddington at age 27.15 He had a photo taken circa 1943. 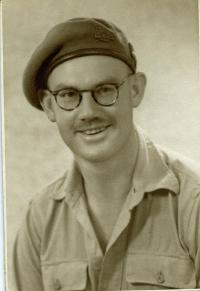 Don Bourke
(Source: Malcolm Cocks)
Donald was posted to a position with the 3rd Cipher Section circa 1945.15 He ended military service on 21 January 1946.15 Donald lived in April 1946 at Potts Point. This was the first reinforced concrete unit block in Sydney.16,17

He married Leila Peard Barker, daughter of Charles Harold Barker and Jennet Elizabeth Wilkinson, in a Church of England cermony at St. Thomas' on Saturday, 20 April 1946 at the Melbourne suburb of Essendon. He was 32 and his wife Leila was 25. Witnesses to the wedding were Ivy Pearl Owens.16 Donald and Leila lived in 1949 at 45a Shaw Street, in Wagga Wagga, New South Wales.18

Donald died in 1996 at the Melbourne suburb of Drommana.15