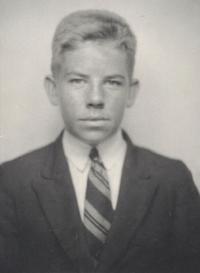 'Bris' Bourke
(Source: Malcolm Cocks)
NOTE: The information on this page is my research to date and is subject to change as I become better informed. I very much welcome any corrections or additional info you might have - my email address is at the bottom of this page. Whilst historical facts are not copyright, my writing about these facts are. If you wish to use any text from this site on Ancestry or on any other website, please ask me first - Tim Hill.
+ + + + + + + + + +

Rowland was born on Wednesday, 5 May 1915 at Brisbane.2 He was the son of Donald Hugh Aloysius Bourke and Ivy Pearl Owens. His common name was Dooley. He presumably moved with his parents to the Sydney suburb of Manly. He presumably moved with his parents to Melbourne in October 1917.3 By this time they had also had the telephone connected at home (Manly 327), as had the Hill's next door.4 Rowland and Ivy lived in September 1939 at at 61 Greenknowe Flats in Greenknowe Avenue in the Sydney suburb of Potts Point.5 Rowland was a sergeant with the 3 Coy. 2/1 Battalion 2nd AIF in the Second World War.6

At age 24 he made a will on 2 January 1940 at Ingleburn Army Camp, in Ingleburn, New South Wales. He left everything to his mother, but in the event she had died, everything was to go to his sister. His brother Donald Owen Nicholson Bourke was named as the sole executor.5

His father died 2 June 1941 at the age of 64. Rowland was aged 26 when this happened.7 Rowland was on active duty 3 Coy, 2/1 Battalion 2nd AIF in 1941 at the Middle East. A newspaper article, perhaps written by his father, describes an action that he was involved in..8,5

Rowland's brother Donald began military service on Friday, 14 November 1941 at the Sydney suburb of Paddington at age 27.9 He was promoted to Sergeant on 28 August 1942 .10

Rowland died on 9 October 1942 at age 27. He died on active service with the AIF, reportedly of 'illness'. His name is listed on the AIF 2/1 Australian Infantry Battalion Roll of Honor Board in Manly.11,12 His body was interred at Port Moresby (Bomana) War Cemetery at Port Moresby, New Guinea. Plot: B1. B. 19..13 He was still recorded on the electoral role in 1943 and 1949 at at 2 Greenknowe Avenue in the Sydney suburb of Potts Point.14,15