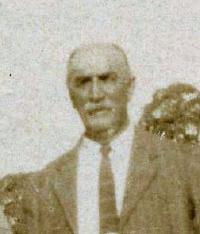 Eleazar Owens c1900
(source: Malcom Cocks)
NOTE: The information on this page is my research to date and is subject to change as I become better informed. I very much welcome any corrections or additional info you might have - my email address is at the bottom of this page. Whilst historical facts are not copyright, my writing about these facts are. If you wish to use any text from this site on Ancestry or on any other website, please ask me first - Tim Hill.
+ + + + + + + + + +

Eleazar emigrated from United Kingdom circa 1877 on the 'Earl Dalhousie.2' Eleazar arrived at Sydney on 17 May 1877.2 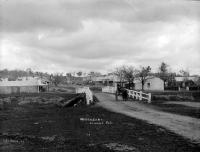 
Eleazar Owens purchased the publican's booth at the Mandurama Races which would 'guarantee that the public will have good licquor' on 4 February 1905 at Mandurama, New South Wales.8 In the later part of his life Eleazar made a living as a publican of the Royal Hotel. However, by the time his youngest child Ivy married in 1911 he had retired.9,10,11,12 Reputedly he found a large nugget of gold.1 Eleazar, as the father of the bride, attended Ivy Pearl Owens and Don Bourke's wedding at the house of Eleazar Owens on Tuesday, 11 April 1911 at Mandurama, New South Wales.. Don was a successful salesman.13,14

Eleazar and Alice visited at Brighton Hotel in the Sydney suburb of Brighton-Le-Sands in February 1921 along with their daughter Ivy and son Owen (along with their spouses) as well as Joe Hill and his wife Mary.15